When attempting to understand and diagnose disease, the first order of business is to be able to identify… 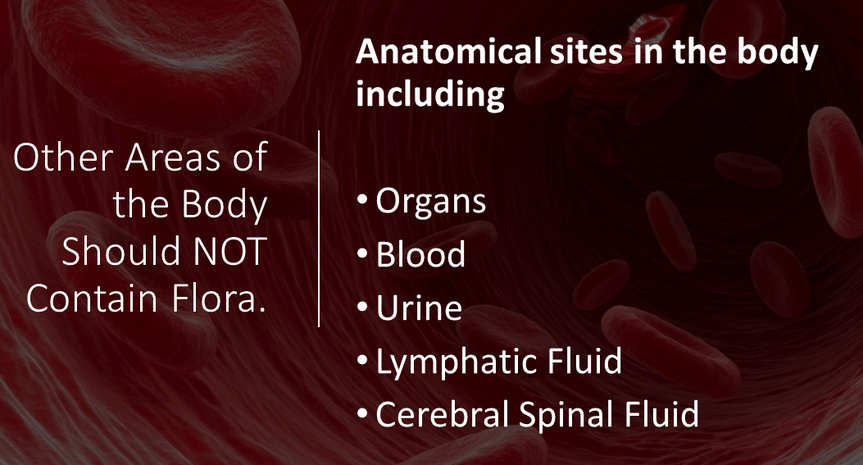 Other Areas of the Body Should NOT Contain Flora. Anatomical sites in the body including the Organs, the Blood, Urine, Lymphatic Fluid or Cerebral Spinal Fluid! 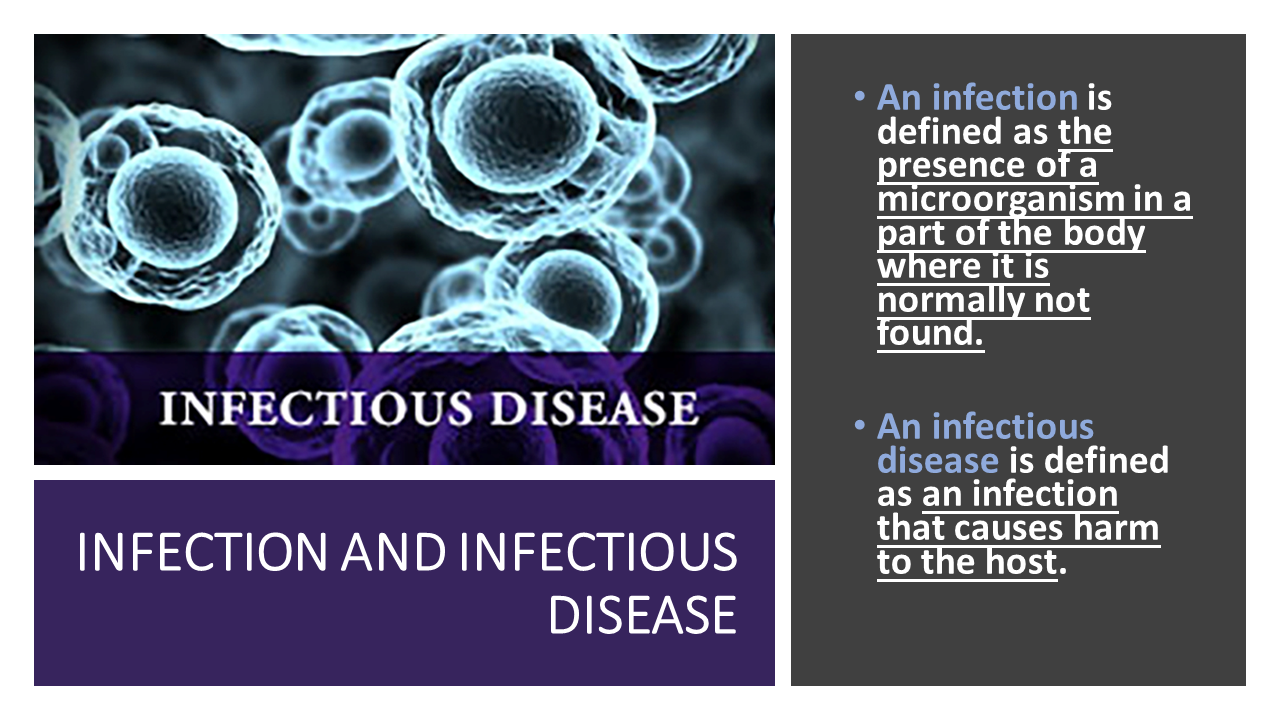 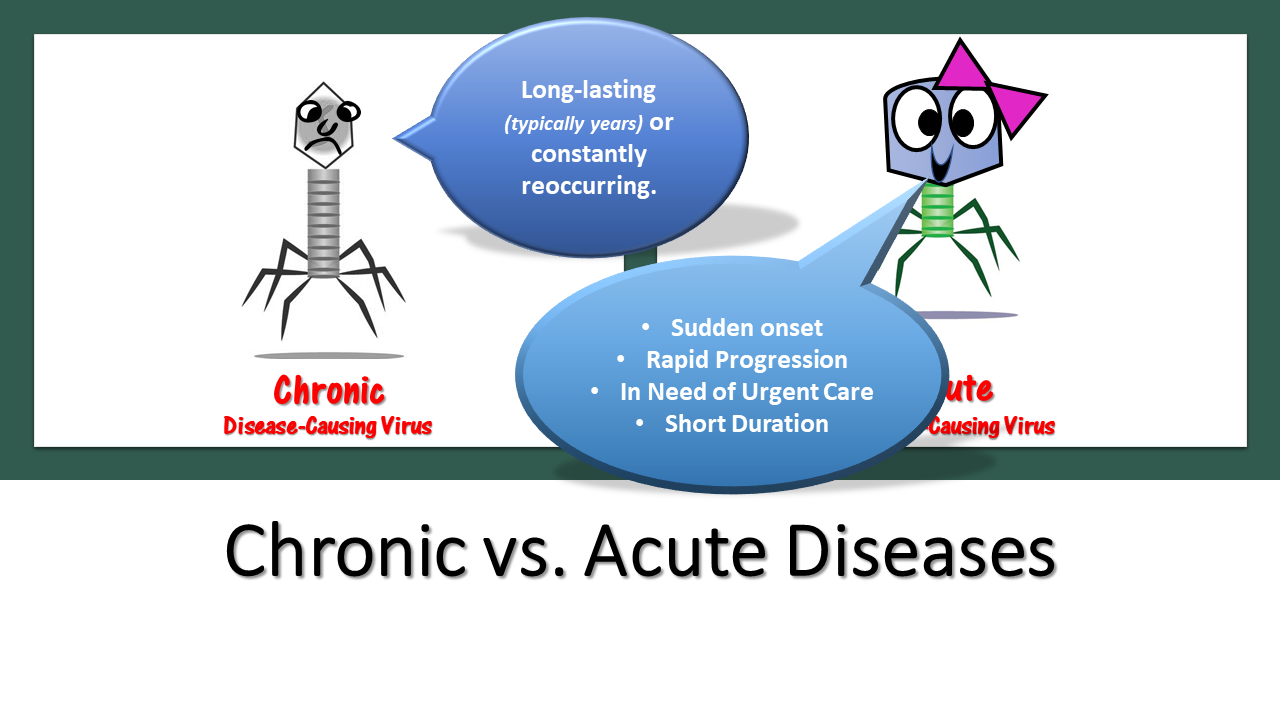 PATHOGENICITY
Pathogenicity varies with a microbe’s ability to invade or harm host tissues and with the condition of host defenses.
Highly pathogenic = spreads easily! 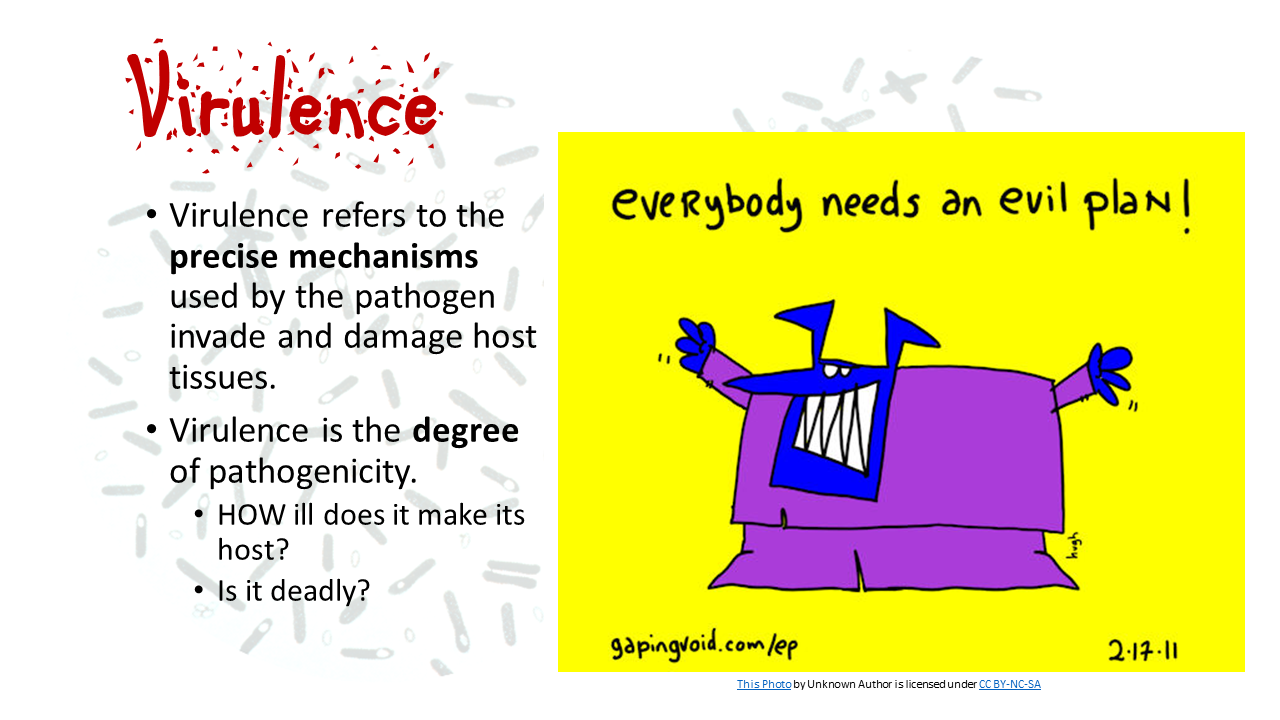 Virulence
Virulence refers to the precise mechanisms used by the pathogen invade and damage host tissues. In other words, virulence is the degree of pathogenicity. For example, HOW ill does it make its host? HOW deadly is the disease? 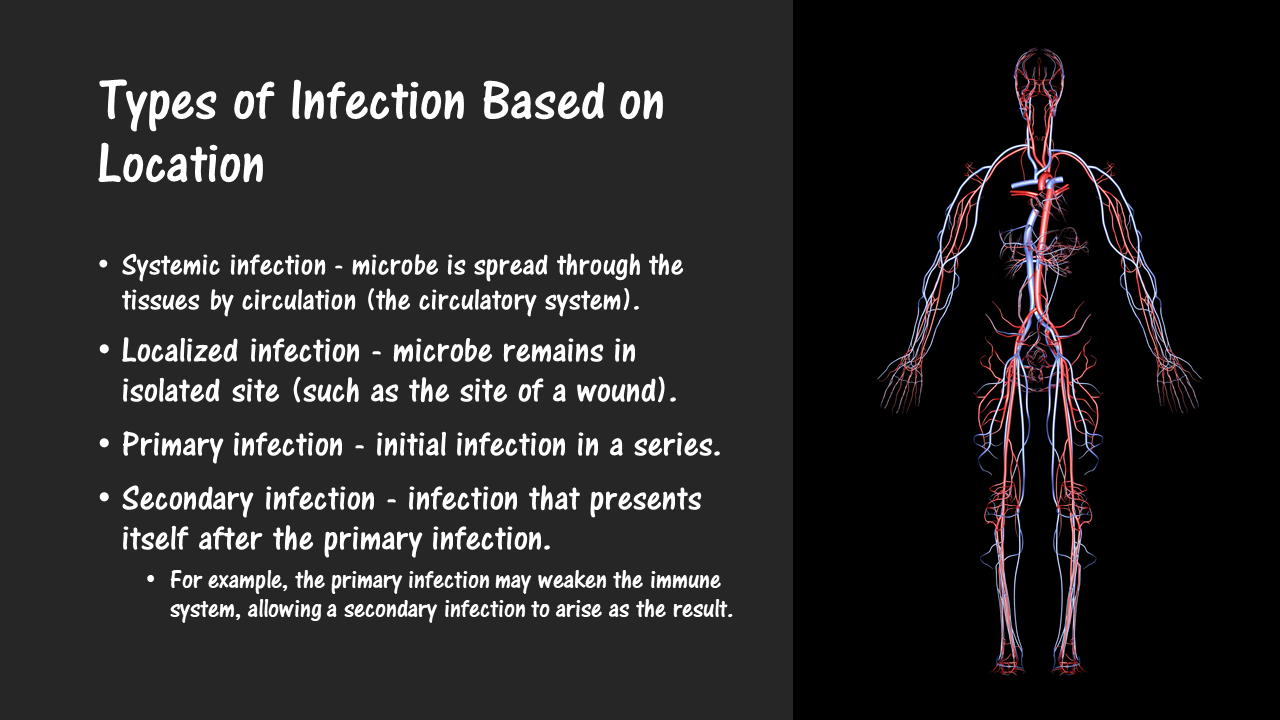 Infectious diseases are diseases that CAN BE SPREAD, from one person to another (direct or indirect contact).

There are two types of contact transmission: direct and indirect. ​

​Indirect contact:
Vectors – Vectors are usually blood-sucking insects that carry pathogens from one human to the next or one animal to a human.
Fomites – Fomites are objects or materials that are likely to carry infection, such as clothes, towels, utensils, and furniture.
Vehicles – Vehicles (soil, water, and food) ​ 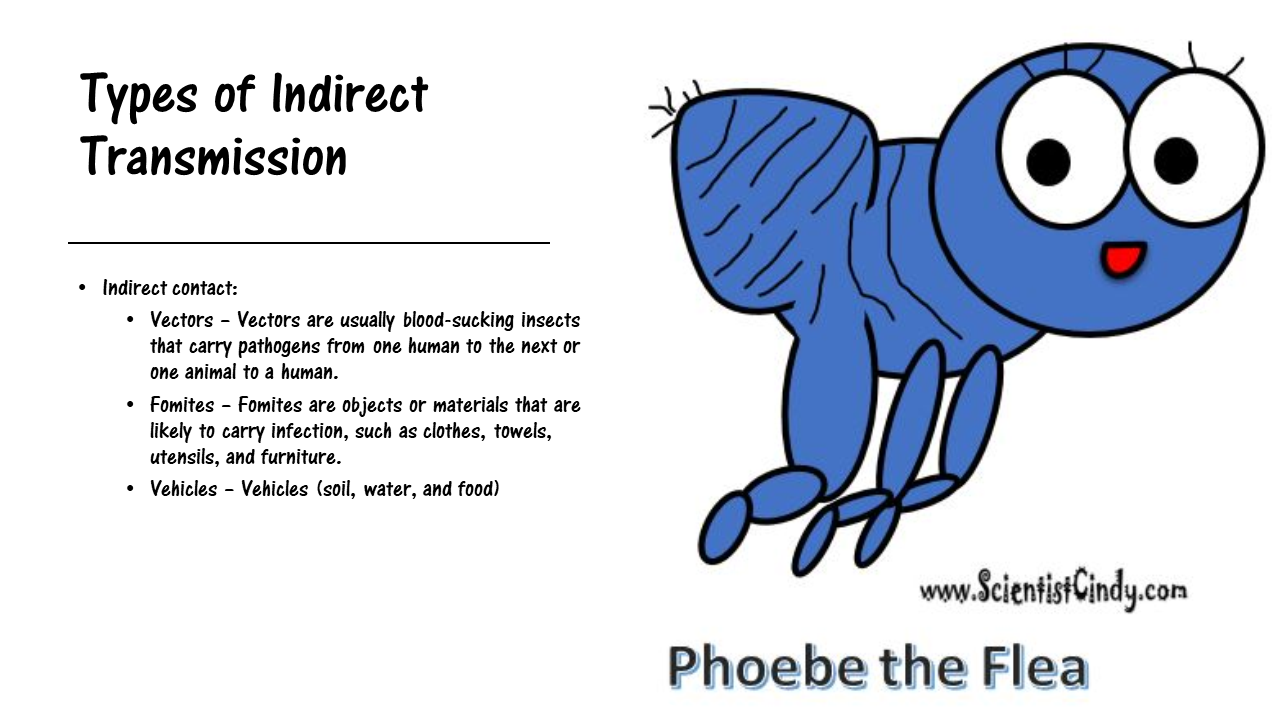 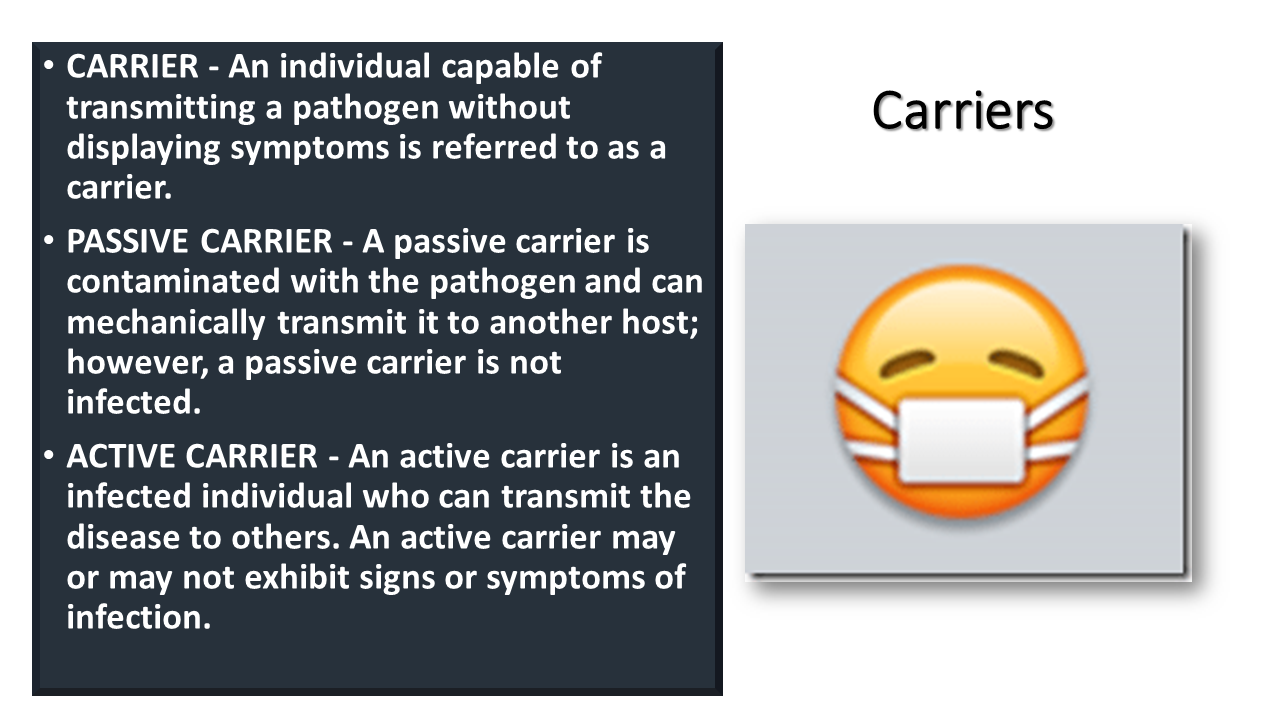 COMMUNICABLE INFECTIOUS DISEASE -  occurs when pathogen is transmitted from host to host directly or indirectly
CONTAGIOUS DISEASES - readily transmissible through direct contact only. 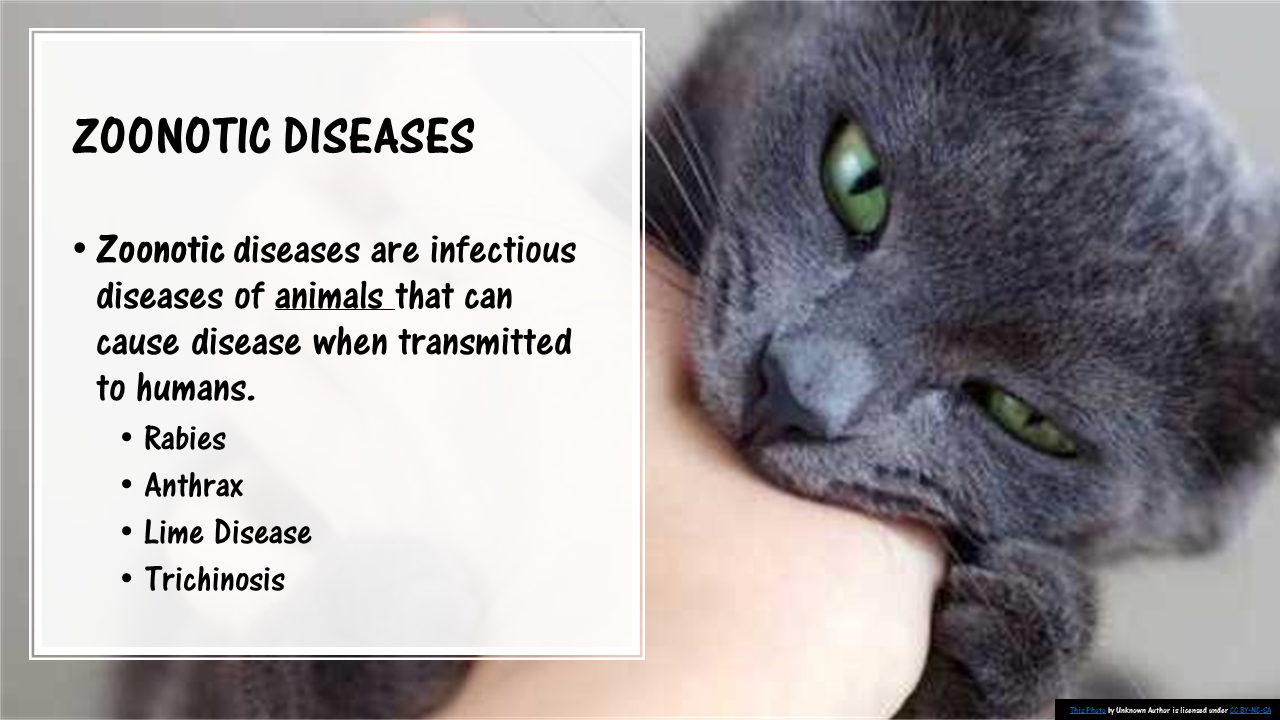 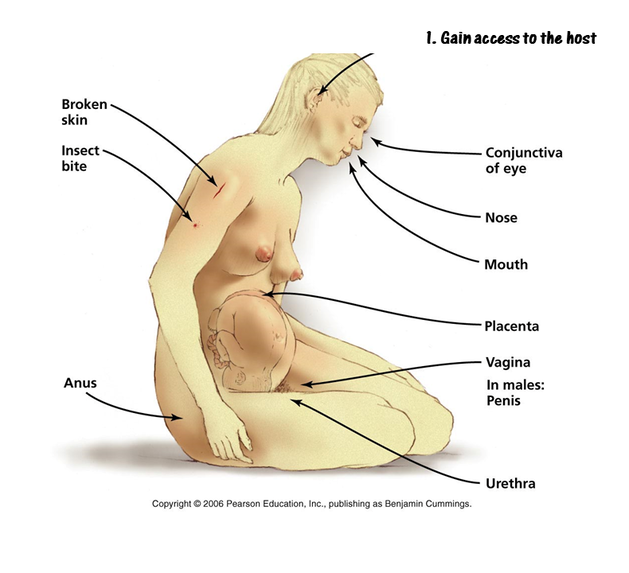 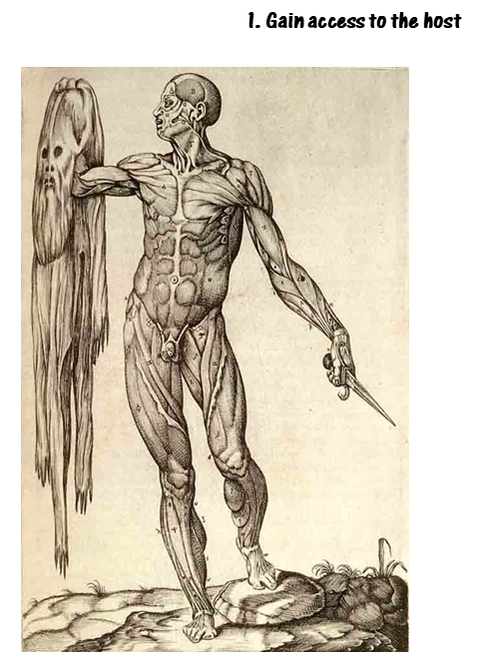 *Skin is usually an impermeable barrier for microorganisms.
When a pathogen enters a host through a parenteral route, it is inserted directly into deeper tissues.

​Parenteral transmission is defined as that which occurs outside of the alimentary tract (gastrointestinal tract).
•Adherence
Adherence is the attachment of the microbe to the host at the portal of entry.Mechanisms of Adhesion
Pathogens can have surface adhesion molecules that are ligands which bind in a lock-and-key manner with receptors on the surface of a host cell.•Mechanisms of 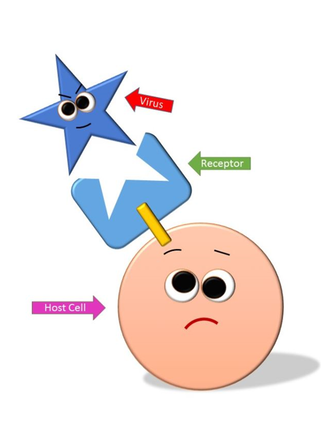 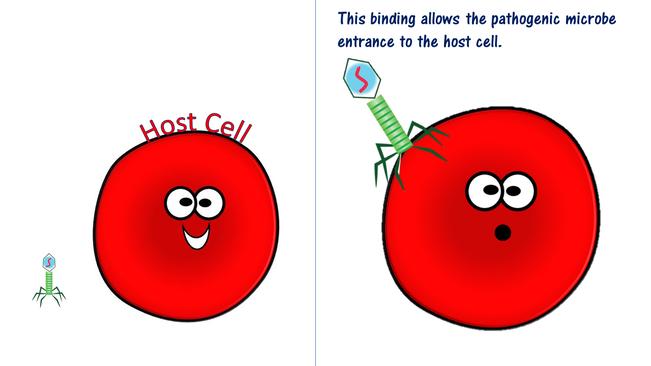 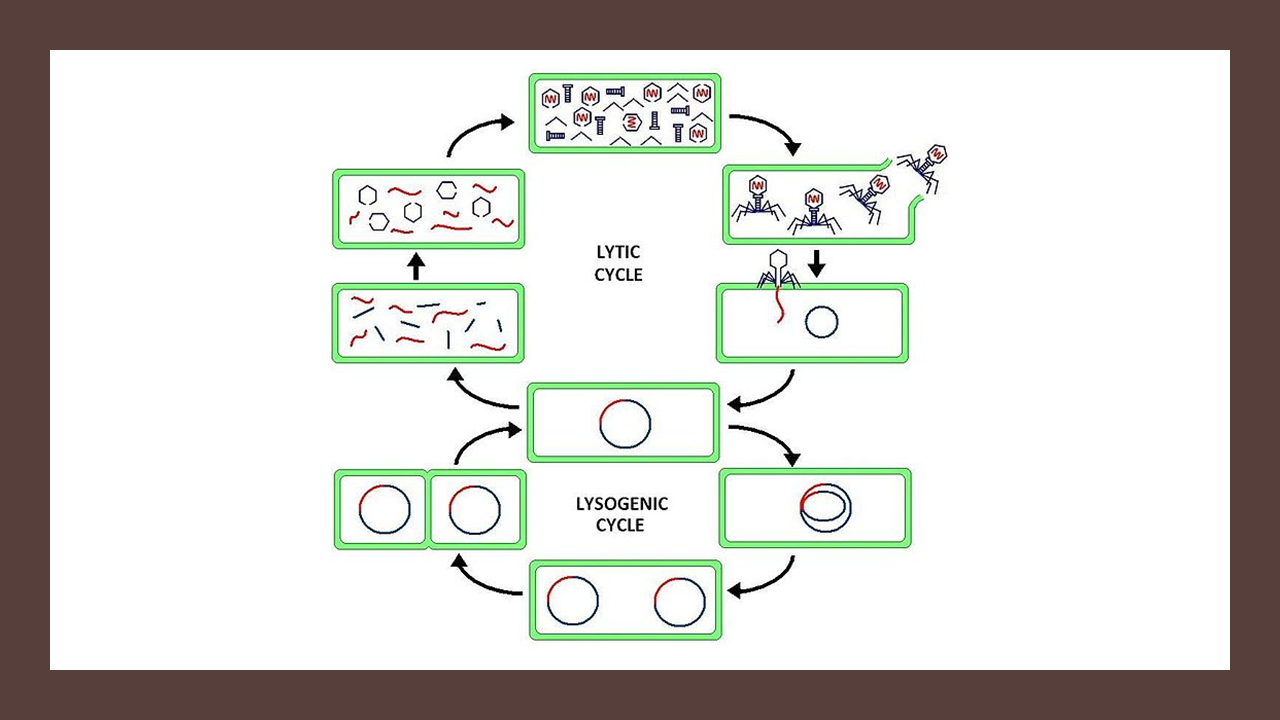 Evasion of Host Defenses -.
​ CAPSULES
The cell capsule is a very large structure of some prokaryotic cells, such as bacterial cells.It is a polysaccharide layer that lies outside the cell envelope of bacteria, and is thus deemed part of the outer envelope of a bacterial cell.
Capsules Evade the Host Immune Defenses by…
impairs phagocytosis: prevents engulfment and destruction by leukocytes• Antigenic Variation
Antigenic Variation - pathogens alter their surface antigens to escape the host immune defenses.
Cell Wall Components such as the M Protein
M protein of Streptococcus pyogenes:
-heat and acid resistant
-mediates attachment of bacterium to epithelial cells
-resists phagocytosis by leukocytes

Direct Damage to Host Cells
When a pathogen grows inside of host cells, the host cells undergo lysis.
When the pathogens are penetrating through the host’s tissue, the cells of that tissue are damaged and die.Once the microbe has invaded the tissue, the result is damage to the tissues through a variety of different mechanisms.

An exoenzyme, also known as an extracellular enzyme, is an enzyme that is secreted by a cell that functions outside of that cell.
Exoenzymes of Pathogens Function to
Examples

Superantigens: are proteins released from pathogenic bacteria that cause a NONSPECIFIC immune response in the host.
This causes release of cytokines which can cause fever, nausea, vomiting, diarrhea, shock and death (septic shock)
e.g. toxic shock syndrome (Staphylococcus) e.g. enterotoxins: Staphylococcal food poisoning

A microbe that is capable of causing disease is referred to as a pathogen, while the organism being infected is called a host. The ability to cause disease is referred to as pathogenicity, with pathogens varying in their ability. An opportunistic pathogen is a microbe that typically infects a host that is compromised in some way, either by a weakened immune system or breach to the body’s natural defenses, such as a wound. The measurement of pathogenicity is called virulence, with highly virulent pathogens being more likely to cause disease in a host.
It is important to remember that there are many variables to take into account in a host-pathogen interaction, which is a dynamic relationship that is constantly changing. The virulence of the pathogen is important, but so is the number of microbes that gained entry to the host, the location of entry, the overall health of the host, and the state of the host’s defenses. Exposure to a pathogen does not ensure that disease will occur, since a host might be able to fight off the infection before disease signs/symptoms develop.

Pathogen TransmissionAn infection starts with exposure to a pathogen. The natural site or home for a pathogen is known as a reservoir and can either be animate (human or animal) or inanimate (water, soil, food).  A pathogen can be picked up from its reservoir and then spread from one infected host to another. Carriers play an important role in the spread of disease, since they carry the pathogen but show no obvious symptoms of disease. A disease that primarily occurs within animal populations but can be spread to humans is called a zoonosis, while a hospital-acquired infection is known as a nosocomial infection.

The mechanism by which a pathogen is picked up by a host is referred to as mode of transmission, with the main mechanisms listed below:
Direct contact
Direct contact includes host-to-host contact, such as through kissing or sexual intercourse, where one person might come in contact with another person’s skin or body fluids. An expectant mother may transmit a pathogen to her infant by vertical contact while pregnant, or during the act of giving birth.
Droplet transmissionDroplet transmission is often considered to be a form of direct contact as well. It involves transmission by respiratory droplets, where an infected host expels the pathogen in tiny droplets by coughing or sneezing, which are then inhaled by a host nearby. These droplets are not transmitted through the air over long distances, nor do they remain infectious for very long.
Indirect contactIndirect contact involves the transfer of the infectious agent through some type of intermediary, such as a contaminated object or person. The pathogen might be deposited on an inanimate object, called a fomite, which is then used by another person. This could include a shared toy or commonly-touched surface, like a doorknob or computer keyboard. Alternatively, a healthcare worked might transmit a pathogen from one patient to another, if they did not change their gloves between patients.
Airborne transmissionAirborne transmission occurs due to pathogens that are in small particles or droplets in the environment, which can remain infectious over time and distance. An example might be fungal spores that are inhaled during a dust storm.
Fecal-oral transmissionFecal-oral transmission occurs when an infected host is shedding the pathogen in their feces which contaminate food or water that is consumed by the next host.
Vectorborne transmission

Pathogen Transmission. By Marie Bello.
Vectorborne transmission occurs when an arthropod vector, such as mosquitoes, flies, ticks, are involves in the transmission. Sometimes the vector just picks up the infectious agents on their external body parts and carries it to another host, but typically the vector picks up the infectious agent when biting an infected host. The agent is picked up in the blood, and then spread to the next host when the vector moves on to bite someone else.
Virulence FactorsIn order for a bacterium to be virulent, it must have capabilities that allow it to infect a host. These capabilities arise from physical structures that the bacterium has or chemical substances that the bacterium can produce. Collectively the characteristics that contribute to virulence are called virulence factors.
The genes that code for virulence factors are commonly found clustered on the pathogen’s chromosome or plasmid DNA, called pathogenicity islands. These pathogenicity islands can be distinguished by a G+C content that differs from the rest of the genome and the presence of insertion-like sequences flanking the gene cluster. Pathogenicity islands facilitate the sharing of virulence factors between bacteria due to horizontal gene transfer, leading to the development of new pathogens over time.
Often the genes for virulence factors are controlled by quorum sensing, to ensure gene activation when the pathogen population is at an optimal density. Triggering the genes too soon could alert the host’s immune system to the invader, cutting short the bacterial infection.
Adherence and ColonizationBacterial pathogens must be able to grab onto host cells or tissue, and resist removal by physical means (such as sneezing) or mechanical means (such as movement of the cilated cells that line our airway). Adherence can involve polysaccharide layers made by the bacteria, such as a capsule or slime layer, which provide adhesion to host cells as well as resistance from phagocytosis. Adherence can also be accomplished by physical structures such as a pilus or flagellum.
Once cells are successfully adhering to a surface, they increase in number, utilizing resources available at the site. This colonization is important for pathogen survival and invasion to other sites, which will yield increased nutrients and space for the growing population.
InvasionInvasion refers to the ability of the pathogen to spread to other locations in the host, by invading host cells or tissue. It is typically at this point when disease or obvious signs/symptoms of illness will occur. While physical structures can still play a role in invasion, most bacterial pathogens produce a wide array of chemicals, specifically enzymes that effect the host’s cells and tissue. Enzymes such as collagenase, which allows the pathogen to spread by breaking down the collagen found in connective tissue. Or leukocidins, which destroy the host’s white blood cells, decreasing resistance. Hemolysins lyse the host’s red blood cells, releasing iron, a growth-limiting factor for bacteria.
Bacteria in the bloodstream, a condition known as bacteremia, can quickly spread to locations throughout the host. This can result in a massive, systemic infection known as septicemia, which can result in septic shock and death, as the host becomes overwhelmed by the bacterial pathogen and its products.
ToxinsToxins are a very specific virulence factor produced by some bacterial pathogens, in the form of substances that are poisonous to the host. Toxigenicity refers to an organism’s ability to make toxins. For bacteria, there are two categories of toxins, the exotoxins and the endotoxins.
ExotoxinsExotoxins are heat-sensitive soluble proteins that are released into the surrounding environment by a living organism. These incredibly potent substances can spread throughout the host’s body, causing damage distant from the original site of infection. Exotoxins are associated with specific diseases, with the toxin genes often carried on plasmids or by prophages. There are many different bacteria that produce exotoxins, causing diseases such as botulism, tetanus, and diphtheria. There are three categories of exotoxins:

AB-toxin: Host Cell Binding. By Marie Bello.
EndotoxinsEndotoxins are made by gram negative bacteria, as a component of the outer membrane of their cell wall. The outer membrane contains lipopolysaccharide or LPS, with the toxic component being the lipid part known as lipid A. Lipid A is heat-stable and is only released when the bacterial cell is lysed. The effect on the host is the same, regardless of what bacterium made the lipid A – fever, diarrhea, weakness, and blood coagulation. A massive release of endotoxin in a host can cause endotoxin shock, which can be deadly.
Key Wordspathogen, host, pathogenicity, opportunistic pathogen, virulence, reservoir, carrier, nosocomial infection, mode of transmission, direct contact, vertical contact, droplet transmission, indirect contact, fomite, airborne transmission, fecal-oral transmission, vectorborne transmission, virulence factor, pathogenicity island, adherence, colonization, invasion, bacteremia, septicemia, toxin, toxigenicity, exotoxin, Type I/cell surface-active toxin, superantigen, T cell, cytokine, Type II/membrane-damaging toxin, Type III/intracellular toxin, AB toxin, endotoxin, lipid A, endotoxin shock.
Study Questions