Mannitol salt agar (MSA) is BOTH a selective medium and a differential medium.

Differential media is a media that is able to differentiate between different types of bacteria by exhibiting different colors (or some other physical/chemical change).

The Selective Properties of MSA:
Mannitol salt agar (MSA) is nutrient agar that has a high concentration of salt (NaCl). Staphylococci are able to tolerate the high salt concentration and will grow to produce visible colonies. The high salt content inhibits the growth of many other pathogenic gram-positive and gram-negative bacteria. For this reason, we say that Mannitol salt agar (MSA) is selective for the Gram-positive bacteria Staphylococcus spp. since most other bacteria are unable to grow.

The Differential Properties of MSA:
Mannitol salt agar (MSA) is nutrient agar that in addition to the high salt concentrations that inhibits the growth of most gram-negative bacteria, it also contains the sugar mannitol, along with the pH indicator phenol red.

Mannitol is added to assist in identifying an unknown bacteria. Some bacterial species have the ability to metabolize mannitol through the process of fermentation, due to the presence of coagulase, which breaks down the mannitol.  If an organism can ferment mannitol, it is considered "coagulase +" or "MSA +".  The fermentation of mannitol on the MSA plate produces an acidic byproduct that causes the pH indicator (phenol red) to turn yellow.

Staphylococcus aureus produces yellow colonies with yellow zones.
Coagulase-negative staphylococci (staphylococcus that cannot ferment mannitol)  produce small pink or reddish colonies and do not produce in zones of coloration in the surrounding agar.

This type of approach is considered a "presumptive test" for the presence of pathogenic (pp) Staphylococcus species. 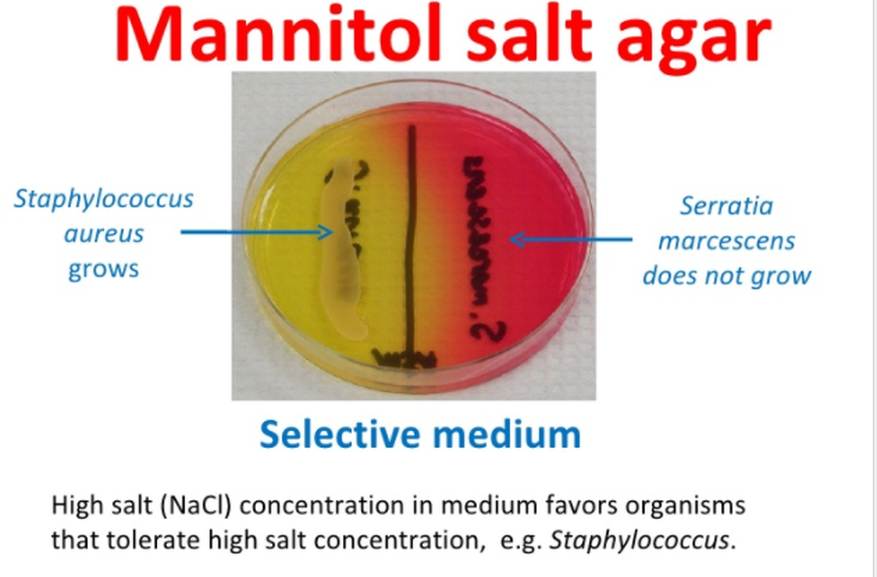 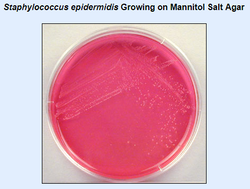 Staphylococcus epidermidis is salt-tolerant (halophilic) so it will grow on the mannitol salt agar (MSA) Plate and will produce colonies.

However, Staphylococcus epidermidis does not have the ability to ferment mannitol, because it lacks the enzyme coagulase. In other words, Staphylococcus epidermis is considered "coagulase -" or "coagulase-negative". Since there is no fermentation, no acidic byproduct is formed, and no color change is produced from the pH indicator phenol red.
The MSA agar will retain its initial red color and will not change to yellow. 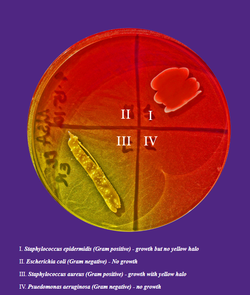 Gram-negative bacteria like E. coli and P. aeriginosa are not tolerant to salt (not halophilic) and will not grow colonies on MSA (see quadrants II and IV).

Pathogenic gram-positive Staphylococcus aureus salt-tolerant (halophilic) and will produce colonies on MSA. Staphylococcus aureus is also able to ferment mannitol, because this bacterial species has the enzyme coagulase required for the process. The fermentation of mannitol by Staphylococcus aureus releases an acidic by product that turns the red MSA to yellow, due to the presence of the pH indicator phenol red (see quadrant III).

Staphylococcus epidermidis is salt-tolerant (halophilic) and will produce colonies on MSA. Staphylococcus epidermidis does not have the ability to ferment mannitol, because it lacks the enzyme coagulase. Since there is no fermentation, no acidic byproduct is formed, and no yellow halo is formed. MSA agar will retain its initial red color and will not change to yellow (see quadrant I). 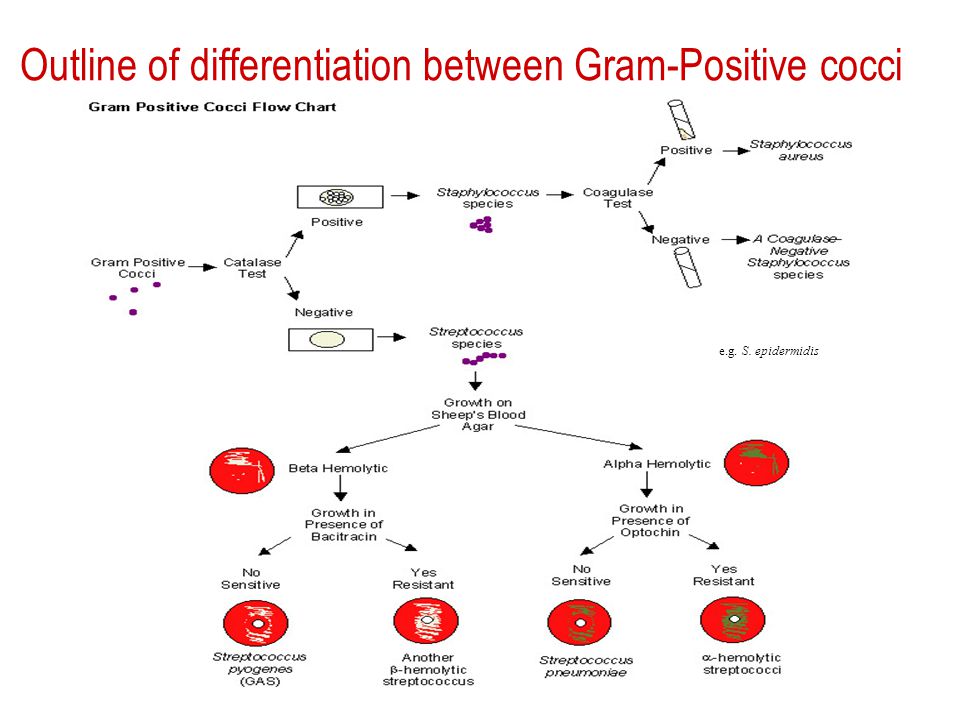