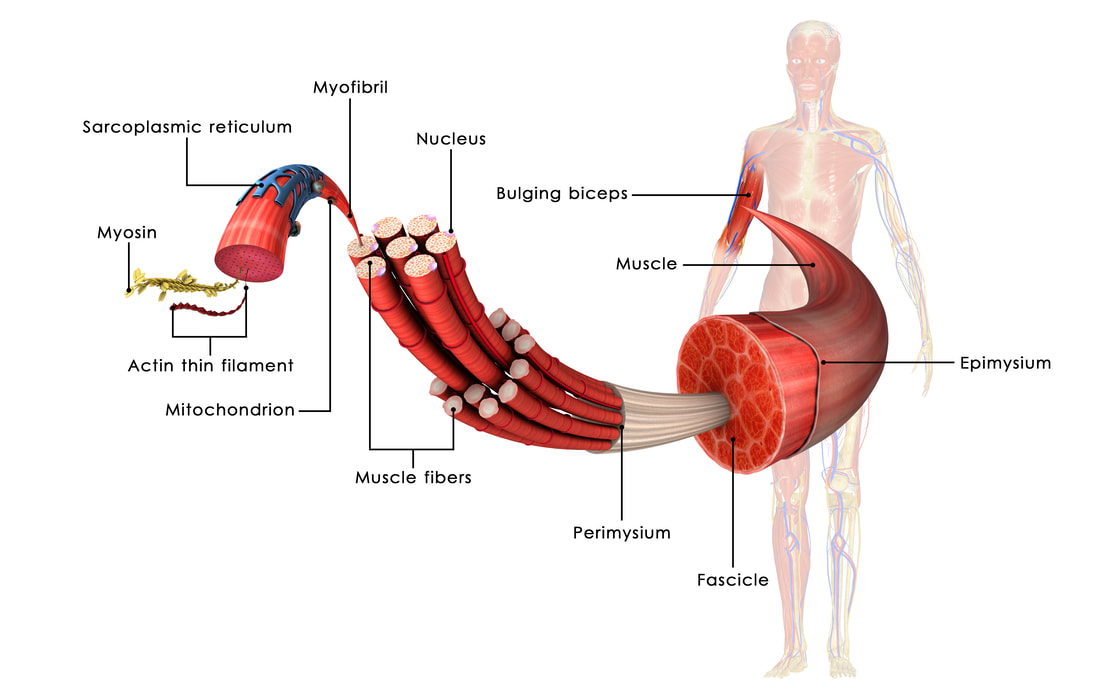 Skeletal muscle is highly organized and follows the following morphology:
1) Skeletal muscle is striated and is composed of muscle fibers (cells)
2) These muscle fibers contain myofibrils
3) Muscle fibers are grouped together to form muscle fascicles
4) Muscle fascicles are grouped together for form muscle bundles
5) The functional unit is the sarcomere
6) myosin (thick) and actin (thin) filaments are highly organized which results in striations. ​ 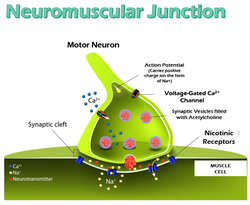 The neuromuscular junction is the site where a motor neuron communicates with a skeletal muscle fiber. The central nervous system (CNS) and skeletal muscle communicate to cause skeletal muscles to contract. Motor neurons receive an action potential from the CNS. When the action potential (AP) reaches the synaptic bulb, voltage gated calcium channels open and calcium ions diffuse into the synaptic bulb to trigger exocytosis of the neurotransmitter acetylcholine (ACh). ACh diffuses across the synaptic cleft and binds to the ACh-gated channels on the motor end plate (MEP) of the sarcolemma (plasma membrane of the muscle fiber). The ACh-gated channels open allowing sodium ions and potassium ions to diffuse across the MEP. A rush of sodium ions crosses into the muscle fiber and depolarizes the membrane resulting in an end-plate potential (EPP). If the EPP reaches threshold, then the action potential travels across the sarcolemma and into the transverse tubules (t-tubules). The voltage-sensing receptors (L-type calcium channels called dihydropyridine receptor, DHP) on the t-tubule change conformation and open the calcium ion release channels (ryanodine receptors, RyR) that are on the sarcoplasmic reticulum (SR; the smooth ER of the muscle cell). Calcium ions diffuse into the cytosol of the muscle fiber and bind to troponin. Troponin changes conformation and moves tropomyosin away from the myosin-binding site on actin. Myosin and actin can now interact to form cross-bridges. 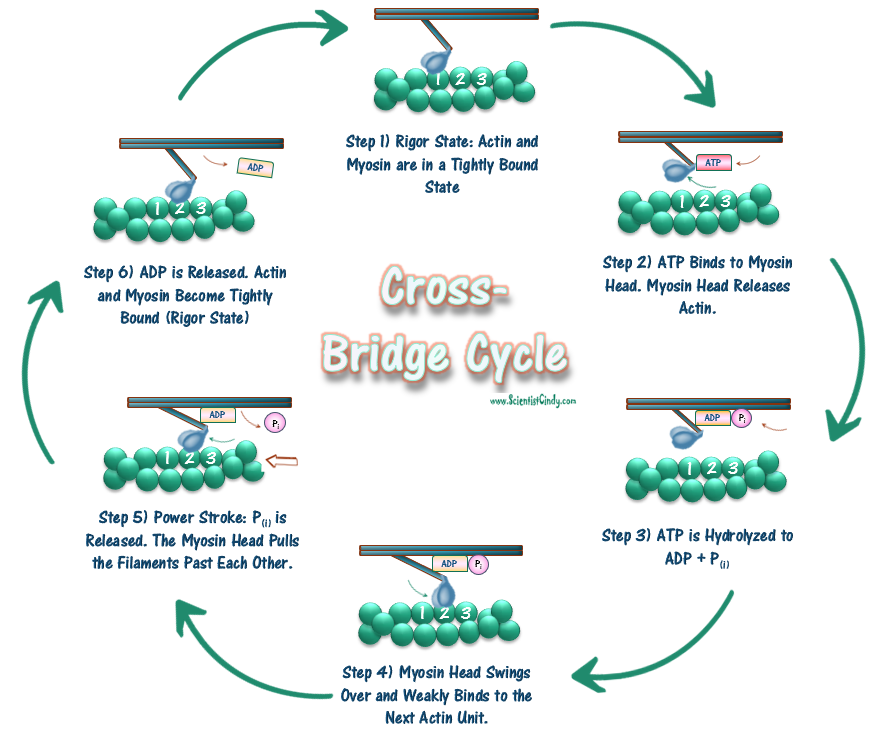 Cross-bridge cycling will continue until ACh is removed from the synaptic cleft by acetylcholine esterase (AChE) or via diffusion. Once ACh is removed, ACh-gated channels on the MEP close resulting in a loss of the AP on the muscle fiber. The SR then closes its calcium ion channels and the calcium ion pumps return the calcium into the SR. Force production is dictated by many factors and processes. Motor units are composed of somatic motor neuron(s) and all the muscle fibers they innervate. Motor units range from small to large. The smaller motor units have a lower threshold while the larger motor units have a higher threshold.

The TWITCH proceeds in 3 distinct phases: 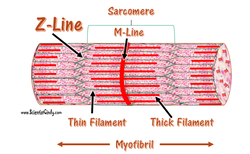 A tetanic contraction can be either unfused (incomplete) or fused (complete). 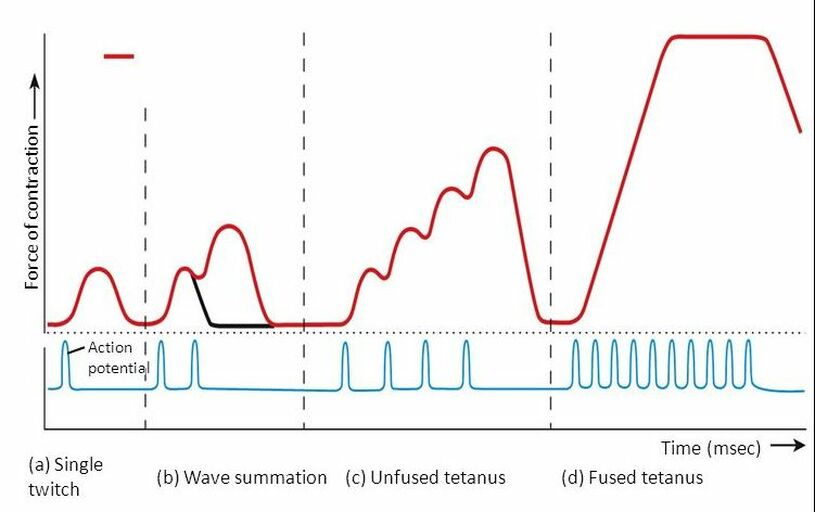 Unfused Tetanus
An unfused tetanus is when the muscle fibers do not completely relax before the next stimulus because they are being stimulated at a fast rate; however there is a partial relaxation of the muscle fibers between the twitches.

Fused Tetanus
Fused tetanus is when there is no relaxation of the muscle fibers between stimuli and it occurs during a high rate of stimulation. A fused tetanic contraction is the strongest single-unit twitch in contraction. It occurs when the contracting tension in the muscle remains constant in a steady state. This is the maximal possible contraction. During tetanic contractions, muscles can shorten, lengthen or remain constant length.
A tetanic contraction (also called tetanized state, tetanus, or physiologic tetanus, the latter to differentiate from the disease called tetanus) is a sustained muscle contraction evoked when the motor nerve that innervates a skeletal muscle emits action potentials at a very high rate. During this state, a motor unit has been maximally stimulated by its motor neuron and remains that way for some time. This occurs when a muscle's motor unit is stimulated by multiple impulses at a sufficiently high frequency. Each stimulus causes a twitch. If stimuli are delivered slowly enough, the tension in the muscle will relax between successive twitches. If stimuli are delivered at high frequency, the twitches will overlap, resulting in tetanic contraction. 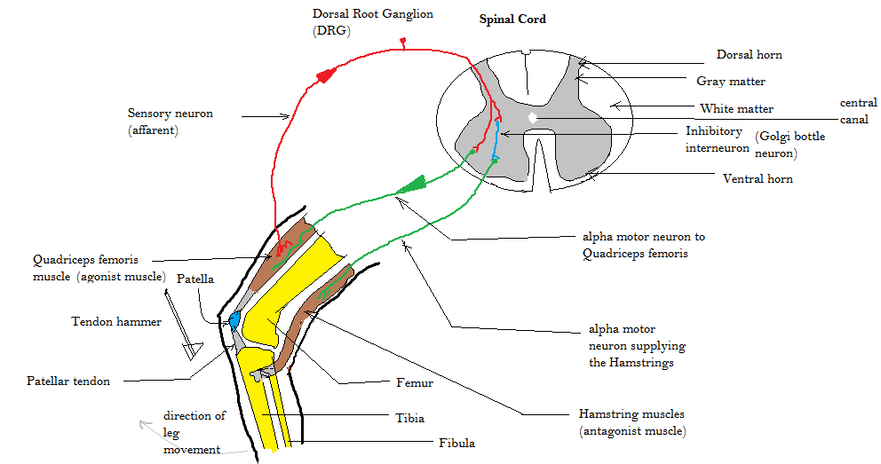 When the quadriceps contract and the hamstrings relax, the knee will extend (knee jerk). Today you will study your own stretch reflexes.

2. Jaw Jerk Exercise
The jaw jerk reflex or the masseter reflex is a stretch reflex used to test the status of a patient's trigeminal nerve (cranial nerve V) and to help distinguish an upper cervical cord compression from lesions that are above the foramen magnum. The mandible—or lower jaw—is tapped at a downward angle just below the lips at the chin while the mouth is held slightly open. In response, the masseter muscles will jerk the mandible upwards. Normally this reflex is absent or very slight. However, in individuals with upper motor neuron lesions the jaw jerk reflex can be quite pronounced.

Equipment • Electrodes • Electrolyte gel • Elastic bands • Stimulator with variable stimulation settings (duration, voltage, and frequency) • Alcohol swabs • Follow directions and ask for help in necessary.
Protocol:
1. Draw a figure displaying a twitch, summation, incomplete (unfused) tetanus, and complete (fused) tetanus. Label the axes and the stimuli.
2. Locate the motor points on the forearm (finger flexor muscle group).
3. Place a droplet of electrolyte gel on each electrode.
4. Place the electrodes on the motor points and secure them with the elastic bands. 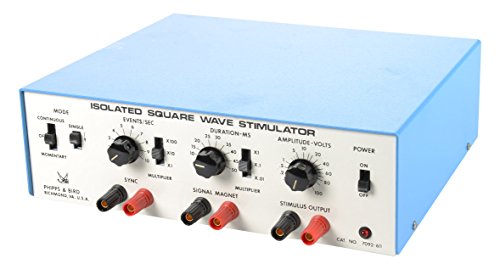 THRESHOLD - When identifying the threshold of a twitch, the amps of the stimulator are adjusted. You can think of amps as the strength of a stimulus. The threshold of a twitch is defined as the smallest current required to produce any recognizable sign of muscle contraction. This may appear as small jerking motion of a muscle (twitch). As the Amps of the stimulator are increased, the strength of the response also increases. This increase is due to the recruitment of additional muscle fibers to contract.
As the amps are increased, the muscle response continues to increase, but only up to a point. There comes a point in which the maximal muscle response is reached and no additional stimulus strength results in any additional muscle response. This point is called the MAXIMAL CONTRACTION.