Why should you know about the female reproductive system? Well, understanding what the body is going through,  helps to make sense of physical symptoms that you or your female friends or family members may be experiencing. It is also very useful to know when fertilization is most likely to happen. This is very important for planning for that
bundle of joy! Knowing this also prevents unplanned pregnancies as well.

You should be confident enough to say the following:

I am in control.
I am informed.
I can make informed decisions.

Women are actually born with as many immature eggs (or oocytes) as they
will ever have in their lifetime! The ovaries are full of follicles. Each follicle has one oocyte that is able to mature, become fertilized and give rise to an embryo. 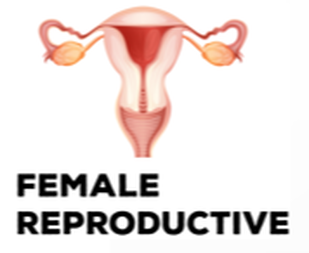 The female body has two ovaries; one on the right and one on the left. The ovary that participates in each monthly cycle changes. The ovaries will basically take turns. For example, one month the right ovary will release an ovum (egg) and the next month the left ovary will release the ovum (egg). For this reason, women who have had damage to or have lost one of their ovaries, will still be able to have plenty of healthy offspring. 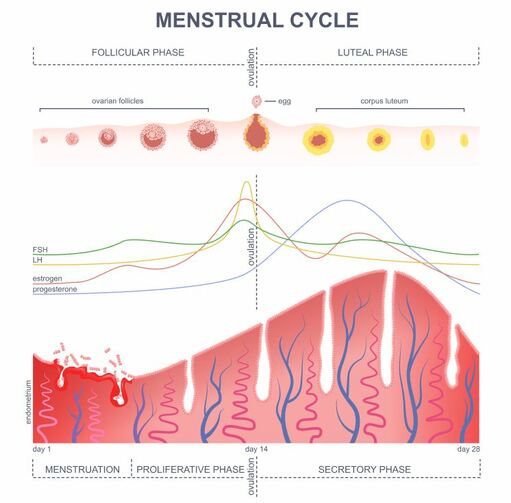 Remember, females are born with as many follicles as they will ever have in their lifetime. The female is born with hundreds of thousands of follicles in each ovary, but thankfully they don't all become children! ​
Each of these follicles houses a single immature egg that will come to maturity. About once every 28 days, one of those follicles in the ovary will mature and give rise to one single ovum. The phase in which this process occurs is called the follicular phase of
the ovarian cycle. Once the ovum has matured, ovulation occurs.
Ovulation is when the mature egg is released from the ovary and enters at the fallopian tube (a.k.a. uterine tube). The fallopian tubes connect the ovaries to the uterus. The uterus is also known as the womb, because if the female is to become pregnant, this is where your the fetus would develop.
​Fertilization of the egg occurs in the fallopian tube, not in the uterus as a lot of people might think. The OVA is able to become fertilized while in the fallopian tube if sperm is present following sexual intercourse. If the egg is not fertilized, it will then break down and it will be expelled from the uterus along with the uterine lining during menstruation. ​
The menstrual cycle is pretty complicated. For this reason we're actually not going
to cover it in great detail here, but it will be covered in a lot more detail on the MENSTRUAL CYCLE page.

The menstrual cycle starts with the follicular phase this goes from day one of your menstrual cycle to about day
The follicle that develops in the ovary will house one single mature ovum.  Once that ovum is mature, ovulation will occur. Ovulation is when the mature egg is released from the follicle. The left over follicle will transform into what is called the corpus luteum, which is Latin for "yellow body". This leftover portion of the follicle called the corpus luteum is actually very important for the luteal phase which is the phase that follows ovulation. So let's just look one more time at the menstrual cycle. Day one is defined as the first day of active bleeding or menstruation. If you are female you may have noticed that your doctor or nurse will ask you every time you go to the doctor when the first day of your last period was. The reason that they're asking this is they want to know where you're at in your cycle
because this is going to change your hormonal levels as well as your temperature.

Every 28 days or so a woman's body prepares itself for pregnancy whether the woman gets pregnant or not and it does this by thickening the walls of uterus to receive a fertilized egg. When the egg does not get fertilized, hormones trigger the thickened lining of the uterus to then break down. The uterine lining leaves the body in the form of a blood-like secretion this is referred to as 'menstruation'. The uterus is also known as the womb because this is where a pregnant female will will keep the fetus and this is where the fetus will grow and develop.

The cervix is the narrow opening from the uterus to the vagina. When a woman is getting ready to give birth a doctor or nurse or medical professional will usually check the cervix to see how much it has dilated. The cervix must be dilated or get bigger in order for the baby to be able to pass through to the outside world and be born. The vagina acts as a birth canal and as receptacle
for spermatozoa during sexual intercourse.