Check Out the Slide Show for Extra Practice!

The word "tissue" is derived from the word meaning "woven". This indicates the intimate structural and functional relationship that exists between the cells in a given tissue. Tissues are made up of a group of cells that have similar origins and serve a specific function in the body. Cells in a tissue are physically arranged in such a way to serve their unique purpose. This is another illustration of the complementarity between structure and function.

Epithelial Tissue
Beauty That is More Than Skin Deep

GIF Animation courtesy of gifsoup.com/view/5132402/skin-anatomy.html
Most of your epithelium is considered "epithelium proper", ​which refers to epithelium that lines your organs, your body cavities and all of your body's inner and outer surfaces. The main function of epithelium proper is protection.

The Characteristics of Epithelial Tissue

-  ​Epithelial tissue is made up of tightly packed epithelial cells that are connected to one another to form sheets.

3. Avascular, but Innervated- Your epithelium does not have its own blood supply, so it must get its nutrients from the nearby connective tissue.  Your nervous system, however, does connect to the epithelial cells.
4. Supported by connective tissue -  As previously stated, the bottom portion of epithelial tissue is called the basal side. The basal side of the tissue is connected to a basal membrane.The basement membrane is composed of collagen fibers and it function to connect your epithelial tissue to the underlying connective tissue.
5. High regenerative capacity–Epithelial cells  can be replaced fairly rapidly to replaces old or damaged cells. This is an important property for wound repair.
TRY OUT YOUR SKILLS WITH THIS QUIZ!   Updated  - 02/21/2017

How Are Different Epithelial Types Named?
What's in a name? 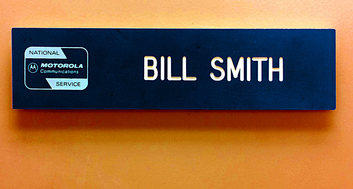 The first name = LAYERING
Epithelial tissue is composed of one or more cell layers. When the tissue is composed of only one layer we refer to the tissue as being "simple". When the epithelial tissue is composed of two or more layers, it is referred to as "stratified". ​The word "stratified" literally means "layered", which also makes sense. ​
​
​The last name = SHAPE
Epithelial tissue can be form from epithelial cells that have varies shapes. The last name of the tissue describe the appearance of the cells that make up the tissue.
There are three principal shapes of epithelial cell: squamous, columnar, and cuboidal.
When we name tissues, we begin with the layering reference, followed by the shape reference. For example, a single layer of squamous epithelium is called, "simple squamous epithelium".  A single layer of columnar epithelium is called, "simple columnar epithelium". And, as you would expect, a single layer of cuboidal epithelium would be called "simple cuboidal epithelium". 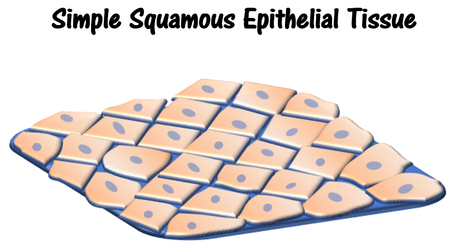 The terminology used for the shape of epithelial tissues is easier to remember than a lot of other terms thrown at you in anatomy class. For once, the vocabulary matches the tissue's appearance. For example, the word "squamous" means "covered in scales". 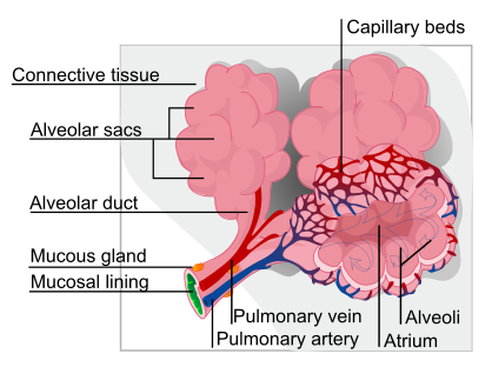 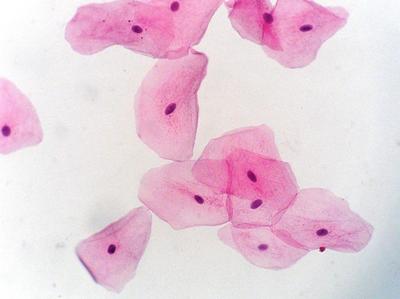 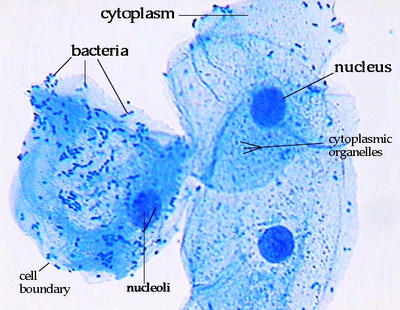 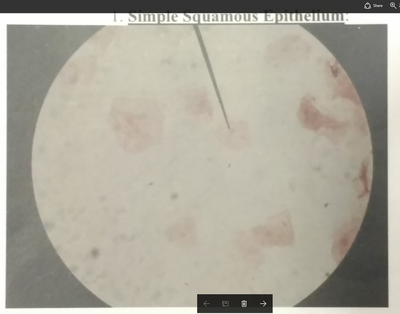 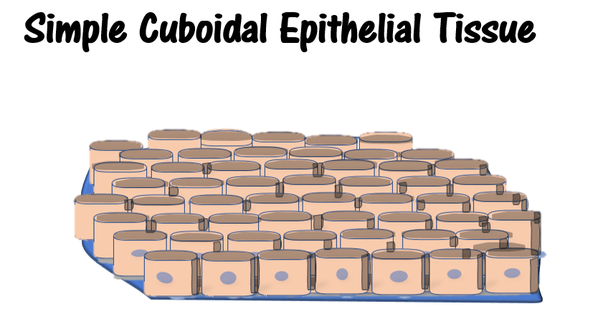 Simple Cuboidal Epithelium - appears as a set of somewhat organized "cubes". Cuboidal cells are seen packed more tightly together in tissues than squamous cells.   The nuclei of cuboidal epithelial cells usually appear round and are located at the center of the cell. 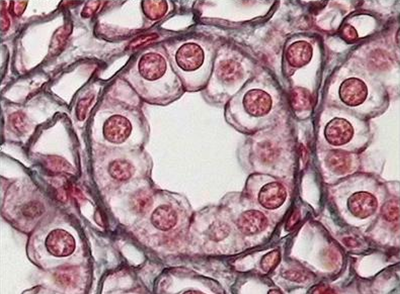 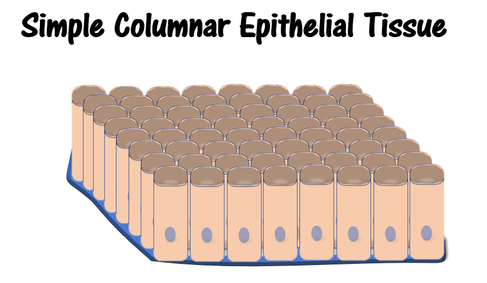 Columnar epithelium looks long and cylindrical, kind of like "columns". Even the nuclei of columnar cells appear elongated into an ellipse. The nuclei of columnar epithelial cells are oriented toward the bottom (or basal side) of the cell (closer to the basement membrane).
​
Columnar cells are specialized for absorption and secretion. They are able to secrete mucus, enzymes, and other substances the body needs. Columnar epithelial tissue is found in our stomach lining where they create and secrete mucus.

​This function requires the cell to have a lot of machinery, so the columnar cells have to be large.
Depending on the location of the tissue, some simple columnar epithelia may contain columnar cells that have cilia at their apical surfaces and may contain goblet cells.
CILIA - The cilia move mucus and other substances along a path. These cells can be found in the bronchial mucosa, which is part of the respiratory system where they function to prevent mucus from building up and blocking the airways. The bronchial mucosa also contains goblet cells which function to secrete mucus. ​​ 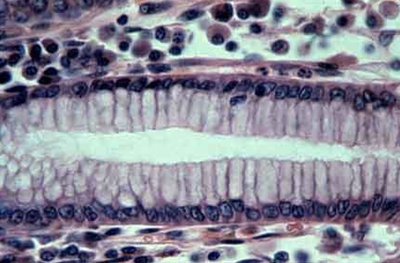 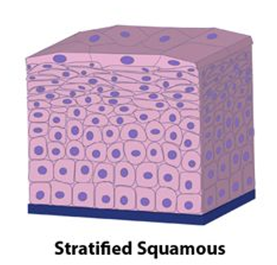 Stratified squamous epithelium is found in areas of your body that experience a lot of "wear and tear" . These vulnerable areas of your body are covered with several layers of squamous tissue in order to protect the deeper tissues that are harder (more biologically expensive) to replace.

Squamous cells are somewhat disposable, meaning they take less time and less biological energy to be replaced. Squamous cells are small, so they can undergo mitotic cell division on short notice. For this reason, squamous epithelium is found in areas that need to be replaced rather frequently like the vagina, the esophagus and the mouth.  Stratified squamous epithelium acts to protect against abrasion.
Slides of Stratified Squamous Epithelium
​(Esophagus) 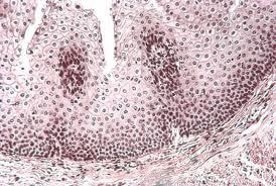 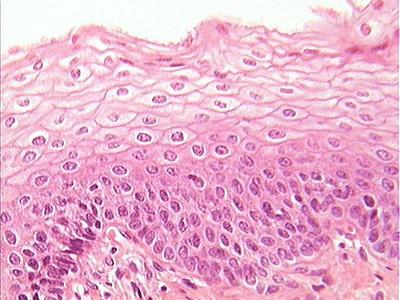 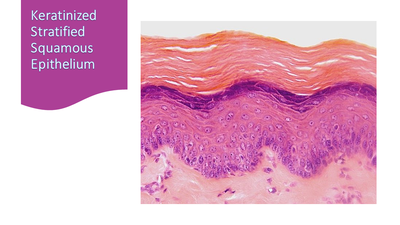 Stratified Cuboidal Epithelial Tissue
​- WILL NOT BE ON PRACTICAL -

Stratified cuboidal epithelium is composed of two or more layers of cube-shaped cells.
​
Distribution and Function - This type of tissue can be observed in sweat glands, mammary glands, and salivary glands and serve to protect the area.

THIS TISSUE TYPE WILL NOT BE ON YOUR PRACTICAL EXAM.
Stratified Columnar Epithelial Tissue is rarest tissue type of tissue. 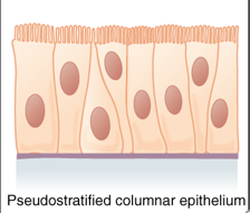 Columnar epithelium can also form a layer in which the nuclei are at different levels within the cells. This type of layering is called "pseudostratified", because, despite the cells forming a single layer, the variable position of the nuclei can make the tissue layer appears as though it was composed of two or more layers. It is for this reason that the layer is called "pseudo" (meaning "fake") - stratified. 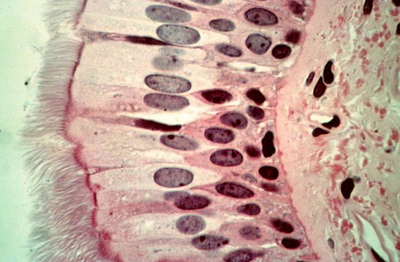 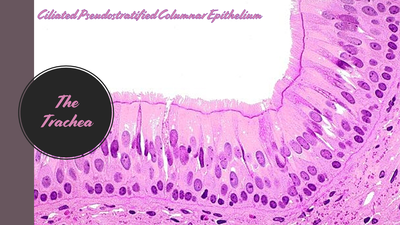 Transitional epithelium lives up to its name. Its name is due to the 'transition' or changes in shape of the cells that make up the tissue. In this type of tissue, the most superficial (apical) cells  get stretched out and deformed. Transitional tissues exist in areas of the body that undergo extreme stretching, like the bladder. The more 'stretchy' the tissue, the more 'bent out of shape' the apical cells become.
When transitional epithelium is not in its stretched shape (for example when your bladder is empty), in an empty bladder) the cells of the surface layers are large and rounded.  When a transitional epithelium is stretched (as it would be in a full bladder) the cells of the surface layers are pulled into a flatter shape.

On a slide, the apical cells appear large and rounded, kind of like flower petals (see below!)

Table Courtesy of 4.2 Epithelial Tissue by Rice University
Table is licensed under a Creative Commons Attribution 4.0 International License, except where otherwise noted. This textbook is available for free at open.bccampus.ca
opentextbc.ca/anatomyandphysiology/chapter/4-2-epithelial-tissue/ 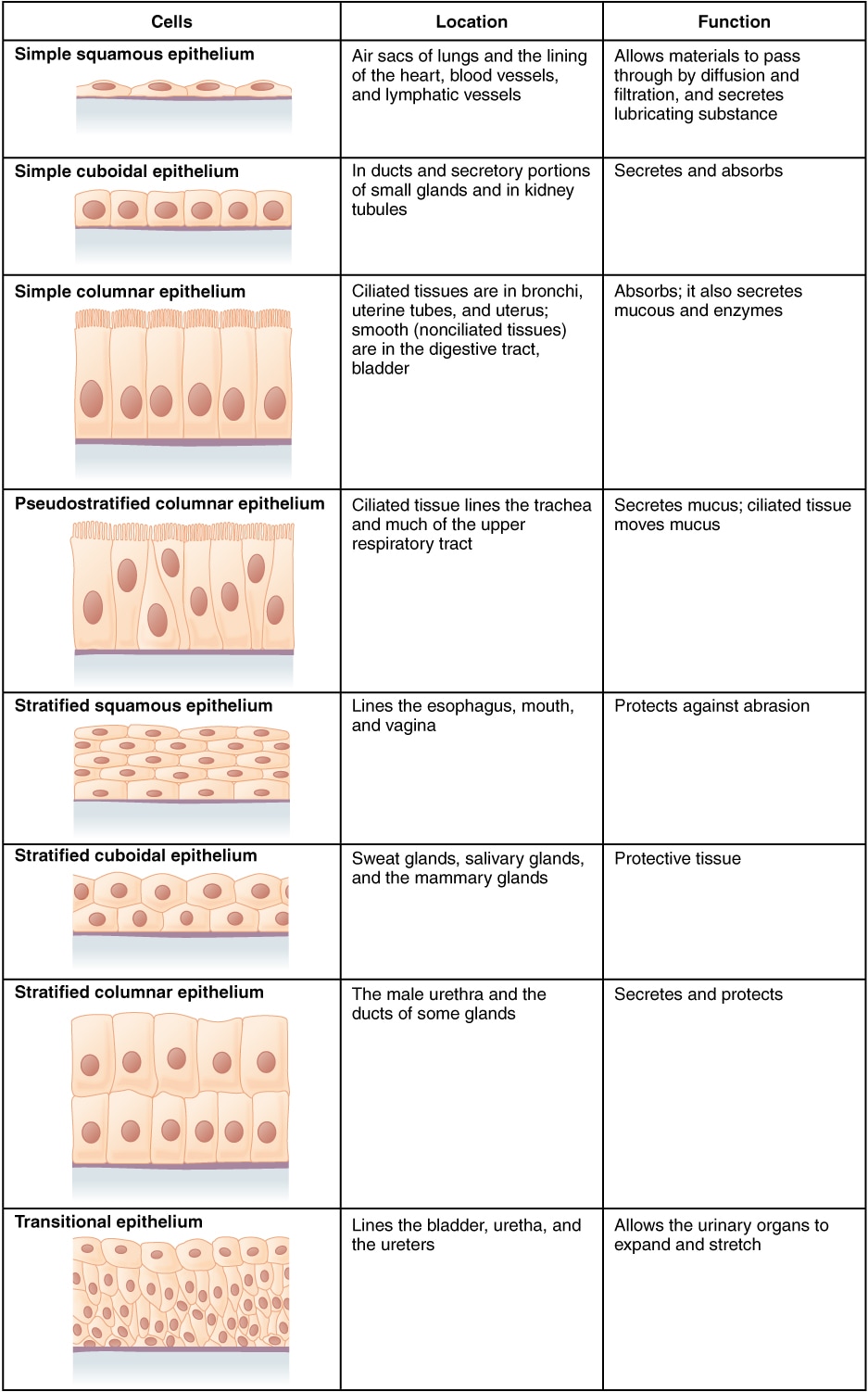 .What is a GLAND?  A gland is an organ that secretes particular chemical substances in or on the body, These substances act to serve a specific function for the body. There are two different kinds of glands at work in the human body; the endocrine glands and the exocrine glands. Your endocrine glands secrete hormones directly into your bloodstream or to nearby cells, Exocrine glands, on the other hand, secrete substances into tubes or ducts that lead to the outer or inner surfaces of your body (the can refer to either the outside of the body, or the inside of your "tube", as opposed to directly into the blood).