A myocyte (also known as a muscle cell or a muscle fiber) is the type of cell found in muscle tissue. Myocytes are long, tubular cells that develop from myoblasts to form muscles in a process known as myogenesis.

There are various specialized forms of myocytes: cardiac, skeletal, and smooth muscle cells, with various properties. 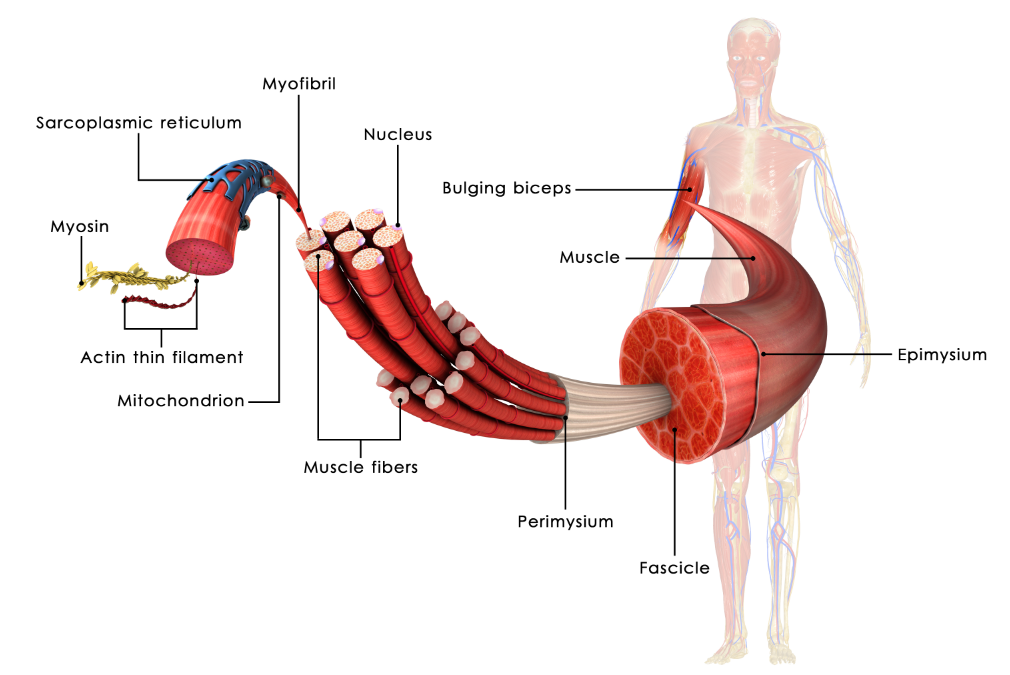 Since skeletal muscle cells (muscle fibers) are made from the fusion of hundreds of embryonic cells, they contain many nuclei. In other words, they are multinucleated. You will notice that the nuclei lie on the outer portion of the muscle fiber when examining skeletal tissue under the microscope.

lains the pattern of 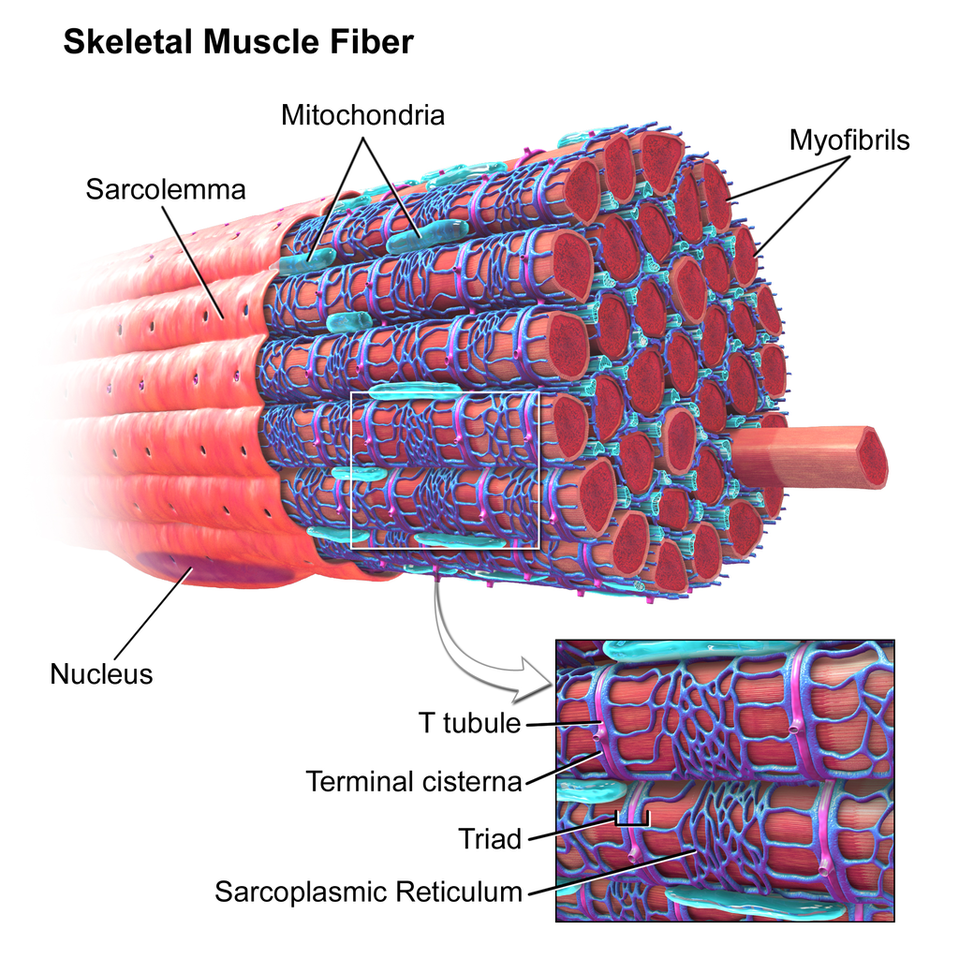 There are 3 Types of Muscle Tissue

Smooth muscle can also function in a "multi-unit" fashion (see animation of the trachea), when there is a coordination of contraction and relaxation in the muscle tissue that acts to move substances from one area to another. Multi-unit smooth muscle is found in the trachea, the large elastic arteries, and the iris of the eye.
​
Smooth muscle is able to stretch and contract repeatedly and upon relaxation will return to its resting shape. This ability is especially important for the digestive tract and the urinary bladder. 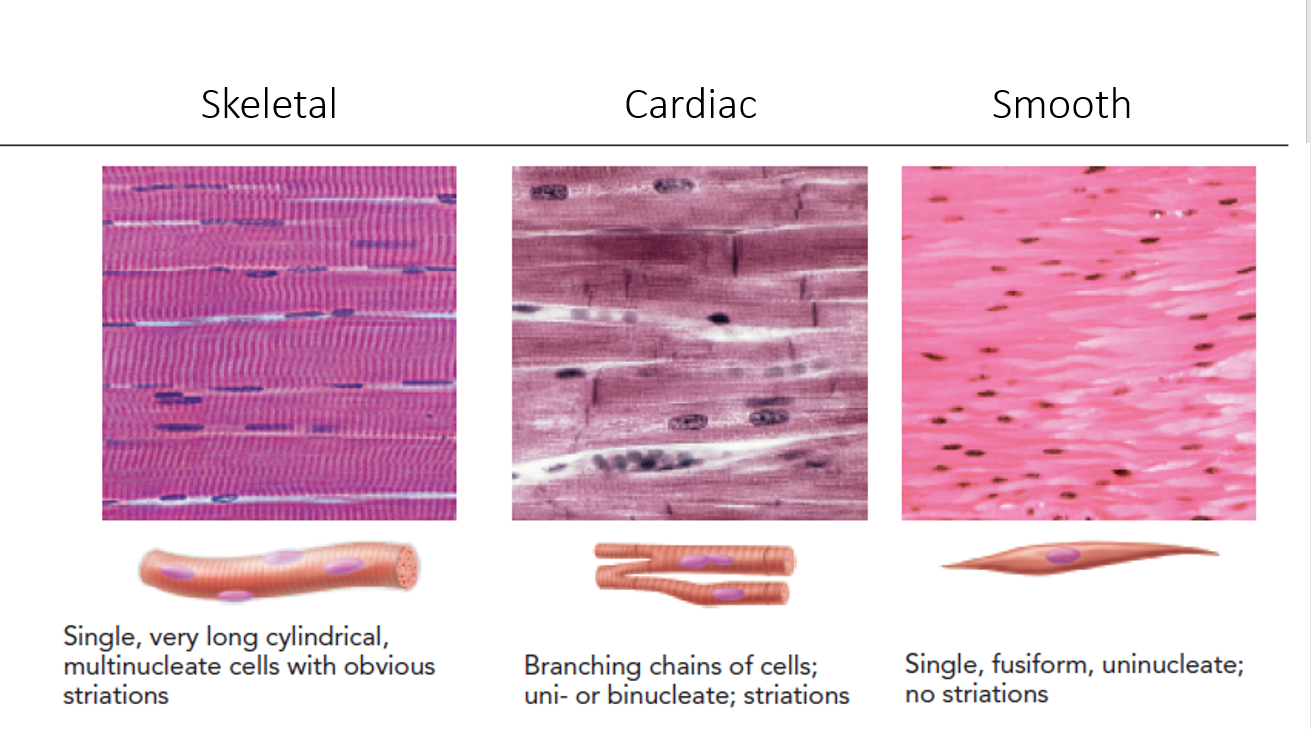 It is Important to be Able to Distinguish Between the Origin and the Insertion Point of a Muscle.     This information will tell us the function of the muscle. Remember that structure equals function!
Skeletal muscles attach to at least 2 bones, and span one movable joint. The way that these muscles attach to the bones of your body, is through TENDONS. Muscles always PULL they never PUSH.  When a muscle contracts, it pulls the bones it connects to closer to one another, by decreasing the angle of the movable joint that is spans.
Typically, when we contract a muscle, one of the bones the muscle attaches to moves a lot, while the other bone(s) the muscle attaches to remains relatively "fixed" in space.
The insertion is usually distal, or further away, while the origin is proximal, or closer to the body, relative to the insertion. For example, one could say the wrist is distal to the elbow. Conversely, you can say the elbow is proximal to the wrist.
Muscular contraction produces an action, or a movement of the appendage. We will use examples to describe how the origin and insertion affect the action of a skeletal muscle.
Action NomenclatureMuscle contraction results in different types of movement. The particular movement is a direct result of the muscle attachment. Most of these movements are realized when we run. Each of these actions can be described in one of two ways.
The first describes action in terms of the bone to which the muscle is attached or the appendage that is moved. For example, the biceps brachii performs flexion of the forearmas the forearm is moved. The second way to describe a muscle's action is based on the joint, or the articulation. For example, that same muscle, the biceps brachii, performs flexion at the elbow, in which the elbow is the joint.


One way to describe muscle action is by the bone that is involved.

Muscle Functional RolesThe human body has over 500 muscles responsible for all types of movement. Each of these muscles has a name; for example, again, the biceps brachii and now the triceps brachii, responsible for both forearm flexion and forearm extension, respectively. When movement of a body part occurs, muscles work in groups rather than individually. Working together enhances a particular movement. During that particular movement, individual muscles will play different roles depending on their origin and insertion. These different roles can be described as agonists (or prime movers), antagonists, or synergists.
Let's take a look at forearm flexion and identify the roles of the different muscles involved. The biceps brachii is the agonist in forearm flexion. An agonist, or as I said before, a prime mover, is the muscle that is primarily responsible for the movement described: forearm flexion. The action makes sense when you consider the muscle's points of attachment.
The biceps brachii originates on the front of the scapula of the shoulder and inserts on the front of the radius in the forearm. Due to these attachments, contraction and muscle shortening of the biceps flexes the forearm.
The triceps is the antagonist, and its action opposes that of the agonist. The triceps brachii originates on the back of the scapula and humerus, and inserts on the back of the ulna in the forearm.
Due to these attachments, the triceps is stretched during forearm flexing. Stretching the muscle causes the triceps muscle to contract and, thus, slow flexion. It's important to note that the antagonist contraction is minor in comparison to the agonist contraction, and therefore it doesn't prevent the action of the agonist. Rather, antagonist contraction controls the movement by slowing it down and making it smooth.

Agonists and antagonists are always functional opposites. Additionally, these muscles switch roles with opposite movements. Let's take a look at an example. The triceps brachii becomes the agonist - while the biceps brachii is the antagonist - when we extend our forearm.
A synergist is a muscle that enhances the action of the agonist. For example, the brachialis is a synergist of the biceps brachii during forearm flexion. The brachialis originates on the humerus, and it inserts on the front of the ulna. As these attachments of the brachialis are similar in nature to those of the biceps brachii, so is its action. Oftentimes, synergist muscles are needed to get a particular action started.
Lesson SummaryIn summary, skeletal muscles are attached to bones on each end by tendons. The origin is the fixed attachment, while the insertion moves with contraction. The action, or particular movement of a muscle, can be described relative to the joint or the body part moved.
Groups of muscles are involved in most movements and names are used to describe the role of each muscle involved. Agonists, or prime movers, are responsible for the bulk of the action. Antagonist contractions are opposite that of the agonist and serve to control the action. Finally, synergist muscles enhance the action of the agonist.