A fungus is any member of the group of eukaryotic organisms in the KINGDOM FUNGI. This includes unicellular microorganisms such as yeasts and molds, as well as multicellular fungi that produce familiar fruiting forms known as mushrooms. ​
Yeast

A.    Yeast is a microscopic fungus consisting of single oval cells that reproduce by budding, and are capable of converting  sugar into alcohol and carbon dioxide.
​
B.    Yeasts are eukaryotic, single-celled microorganisms classified as members of the fungus kingdom.
Yeast can also be used in the process of fermentation to create the biofuel, ethanol! Biofuels are important, because it is cleaner than gasoline and it made from food products like corn and sugar, instead of using fossil fuels.

Fungal Infections Cause a Number of Diseases in Humans

Fungal Growth
ASPERGILLOSIS:
Aspergillosis is fungal infection that is caused by the aspergillis fungus. The fungus grows in the lungs, causing inflammation and blockage of the airways. Infected patients may experience symptoms ranging from mild irritation to fever, pain and difficulty breathing.
Fungus are essential decomposers of the ecosystem!
They function together with certain bacteria to breakdown dead organic matter into a form that can be used in the ecosystem.
For example, fungus will breakdown a dead cow and release vital nutrients into the soil. Those nutrients can then be used by plants to grow. Then another cow can go and eat the plant! ...and the cycle continues!
A lichen is a composite organism that arises from algae or cyanobacteria living among filaments of a fungus in a symbiotic relationship. The combined life form has properties that are very different from the properties of its component organisms. 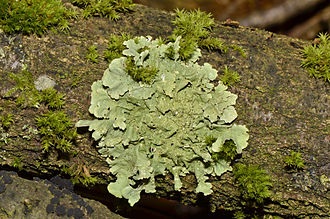 I. Symbiosis of Lichen
a.    Symbiosis in lichens is the mutually helpful symbiotic relationship of green algae living among filaments of a fungus.
b.     The fungus benefits from the algae because they produce food by photosynthesis.
c.    The algae benefit by being protected from the environment by the filaments of the fungus, which also gather moisture and nutrients from the environment, and (usually) provide an anchor to it.