A History of Human Biology 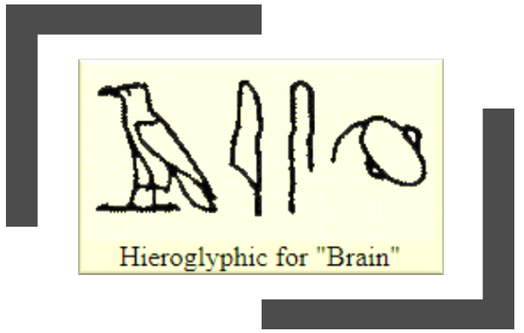 The Ancient Egyptians are responsible for naming most of the major organs and external structures of the body. Texts written as long ago as 3000 B.C. used words such as…  "brain"  ”meninges”  “cerebrospinal fluid”  ​ 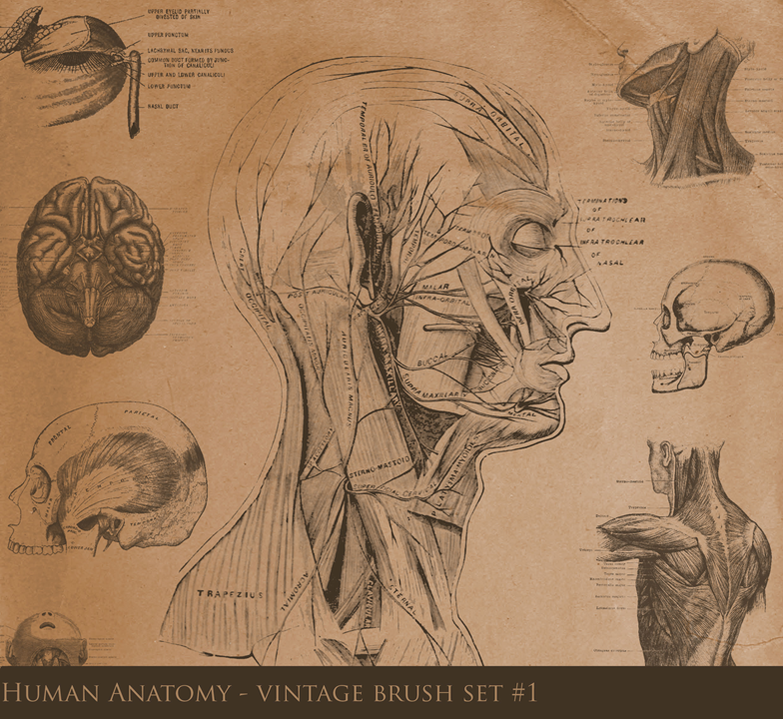 Anatomy taboo?
The interior of our bodies is hidden to us. What happens beneath the skin is mysterious, fearful, amazing. Many religions saw human dissection as a sin (desecration of the body).  anatomical studies were banned in many societies. Very few illustrations existed and not much knowledge about anatomy was passed on. ​

The brain was not always held in high regard. 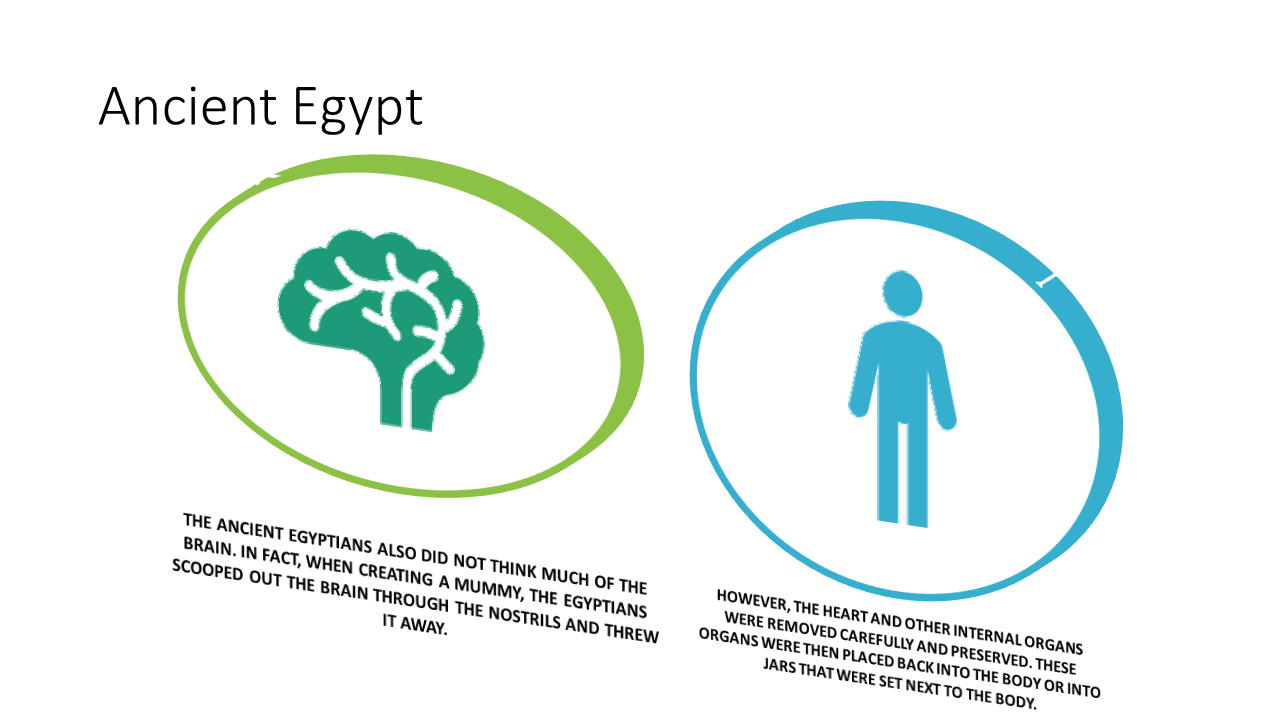 •The ancient Egyptians also did not think much of the brain. In fact, when creating a mummy, the Egyptians scooped out the brain through the nostrils and threw it away.
They left only the heart in place, believing it to be the center of a person's being and intelligence. The other organs were preserved separately, with the stomach, liver, lungs, and intestines placed in special boxes or jars today called canopic jars. These were buried with the mummy.
​ Animals were also mummified, but the brain was just trash.
​The Greek philosopher, Aristotle, thought the heart, not the brain, was the location of intelligence and thought.

In 180 AD., the Greek physician Galen followed Celsus's advice when he first published the results of his work on anatomy, based on two clandestine (secret) dissections.

In 275 BC, Herophilus founded the first school of anatomy at the Museum of Alexandria.  ​ 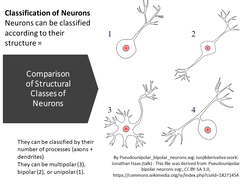 This anatomical demonstration shows a professor in full robe overseeing a dissection and an assistant poised to make his incision. Lint, p. 34. ​ 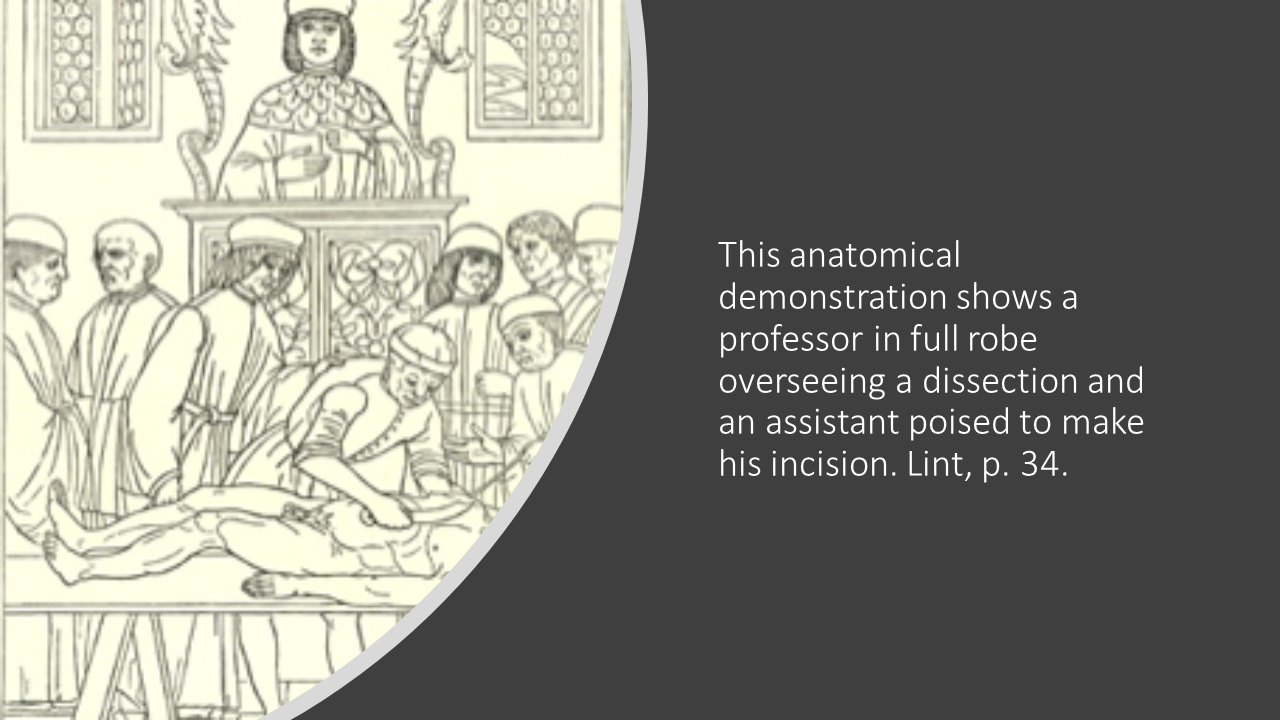 The Hippocratic Corpus catalogued in Alexandria’s renowned library was a collection of works by Hippocrates himself and successor physicians practicing at his school on the eastern Aegean island of Kos. ​ 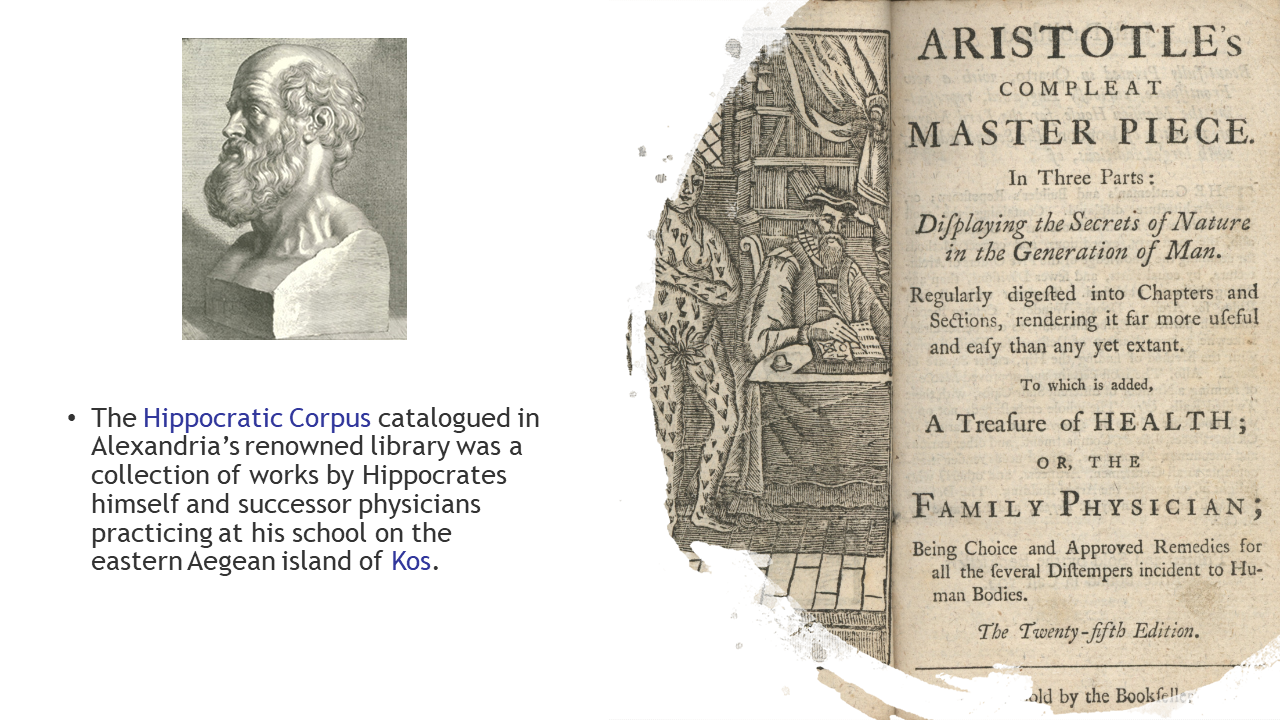 Aristotle was named the “Father of Comparative Anatomy and Physiology”.

However, he believed that the brain cooled the heart by secreting “phlegm”, and that the arteries contained only air. Future discoveries debunked this theory of Aristotle.” 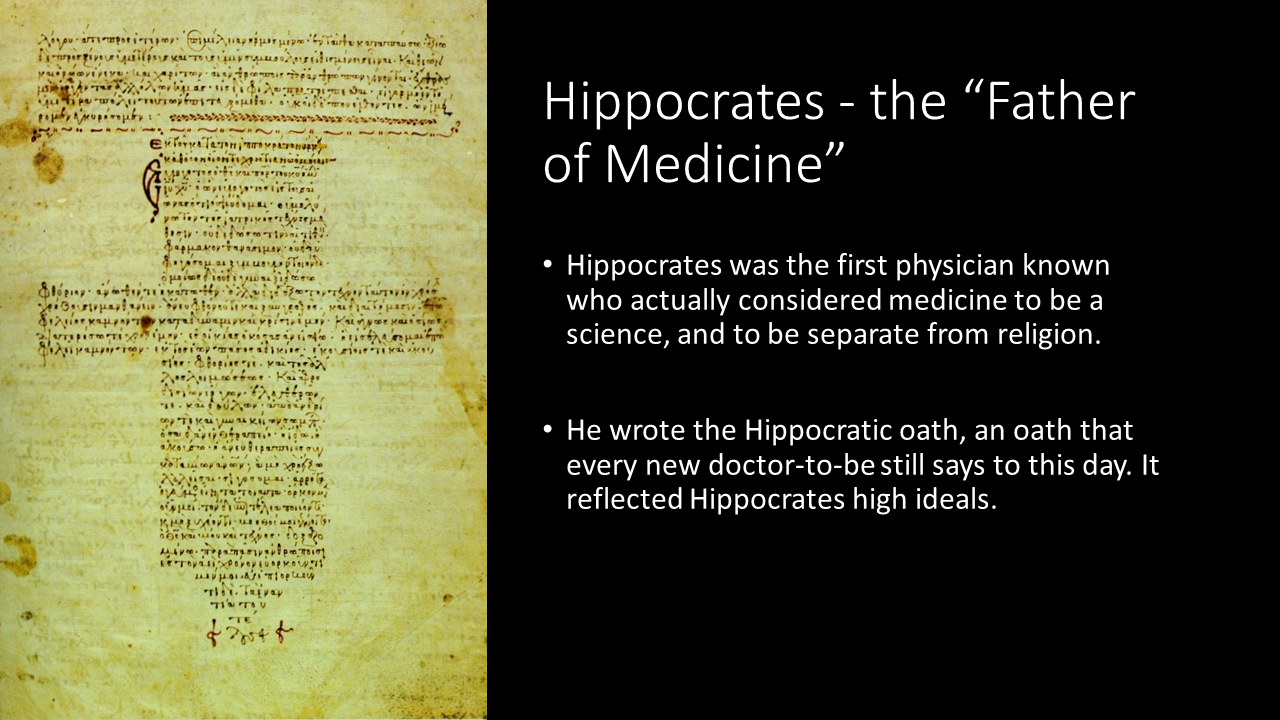 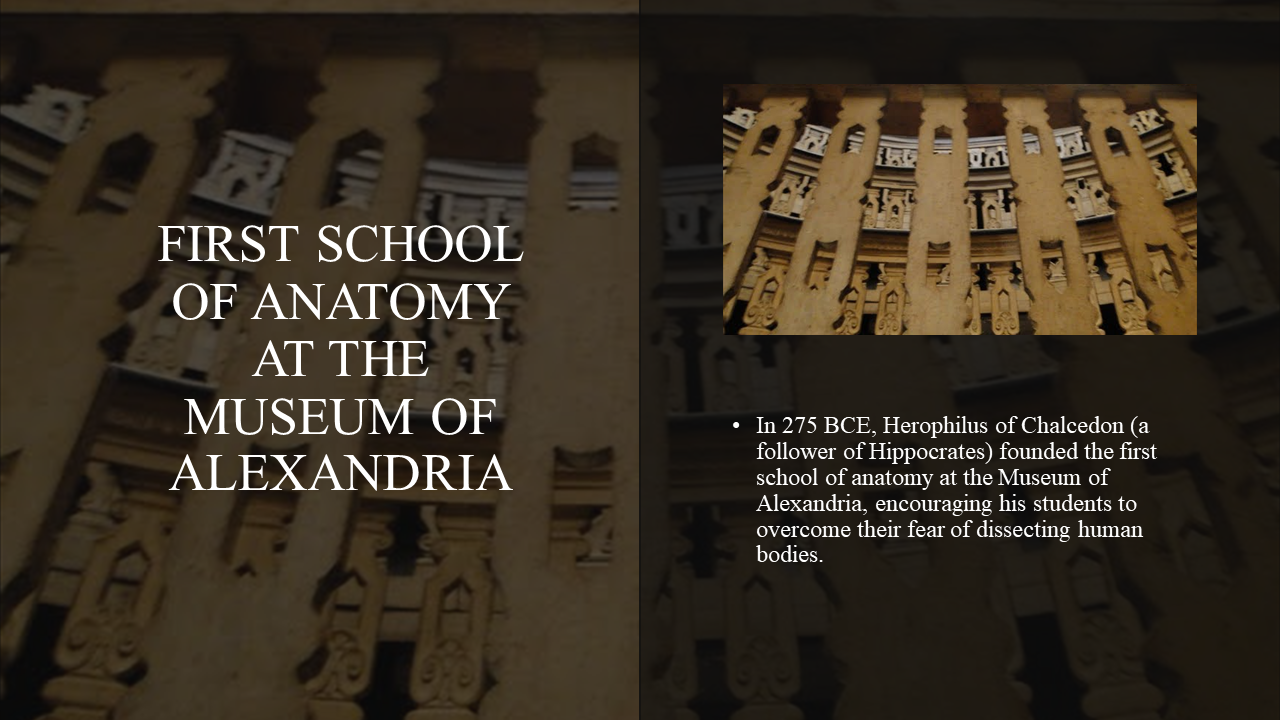 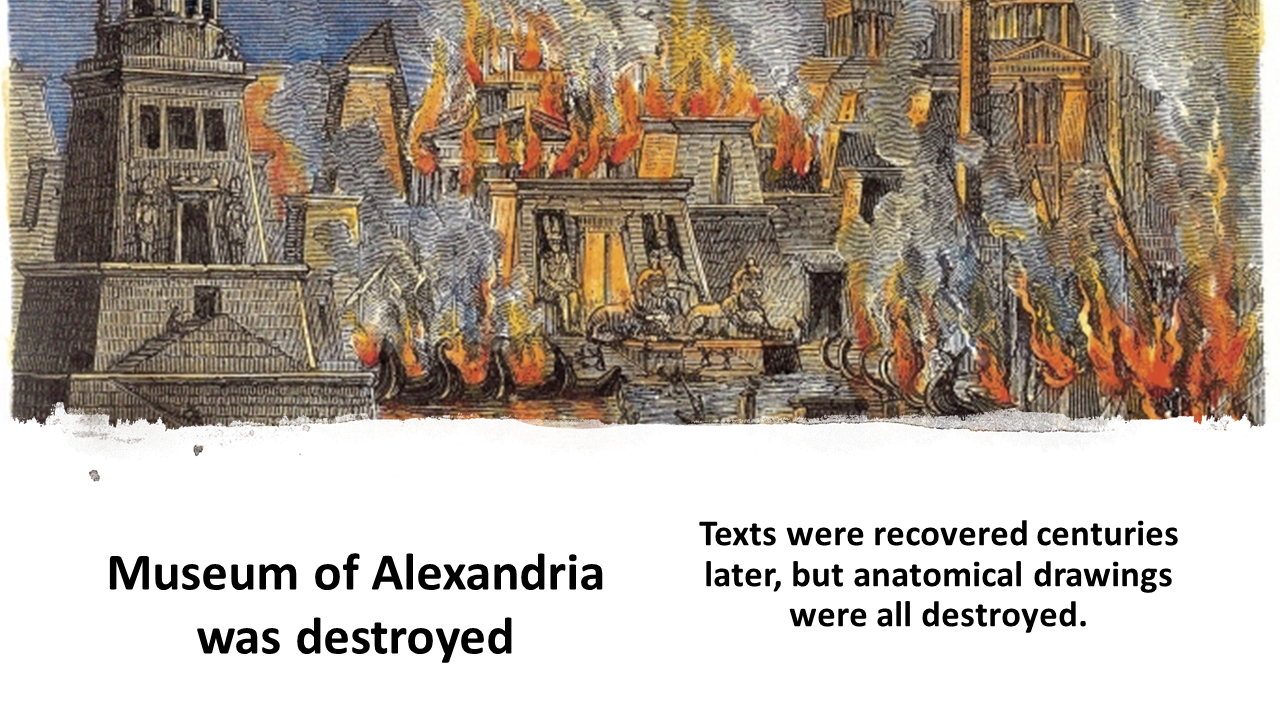 1163 – Church makes law against human dissections in the hopes of curtailing dismemberments.

Early prints of anatomy looked very different from anatomical drawings we have now.
Anatomical images were still viewed as taboo, surreal, beautiful or grotesque.
Anatomical images continue to have a profound impact on the human mind. – Perhaps because this shines a light on our own mortality. 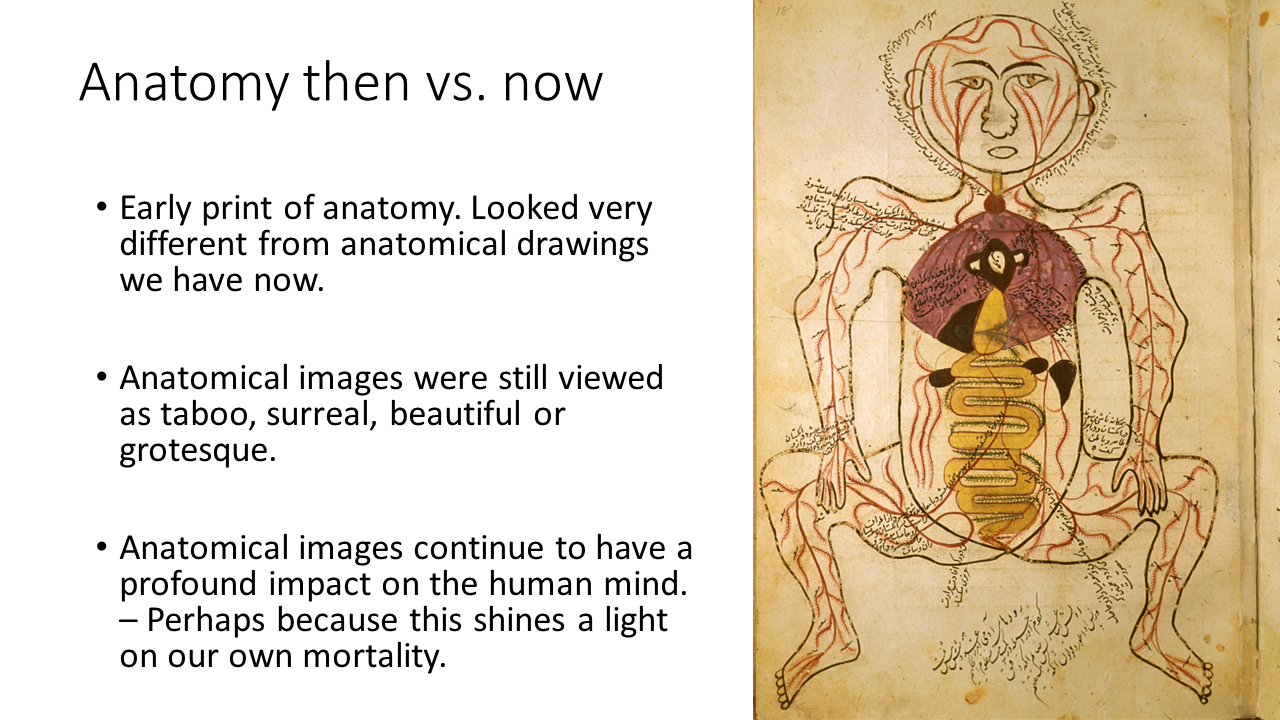 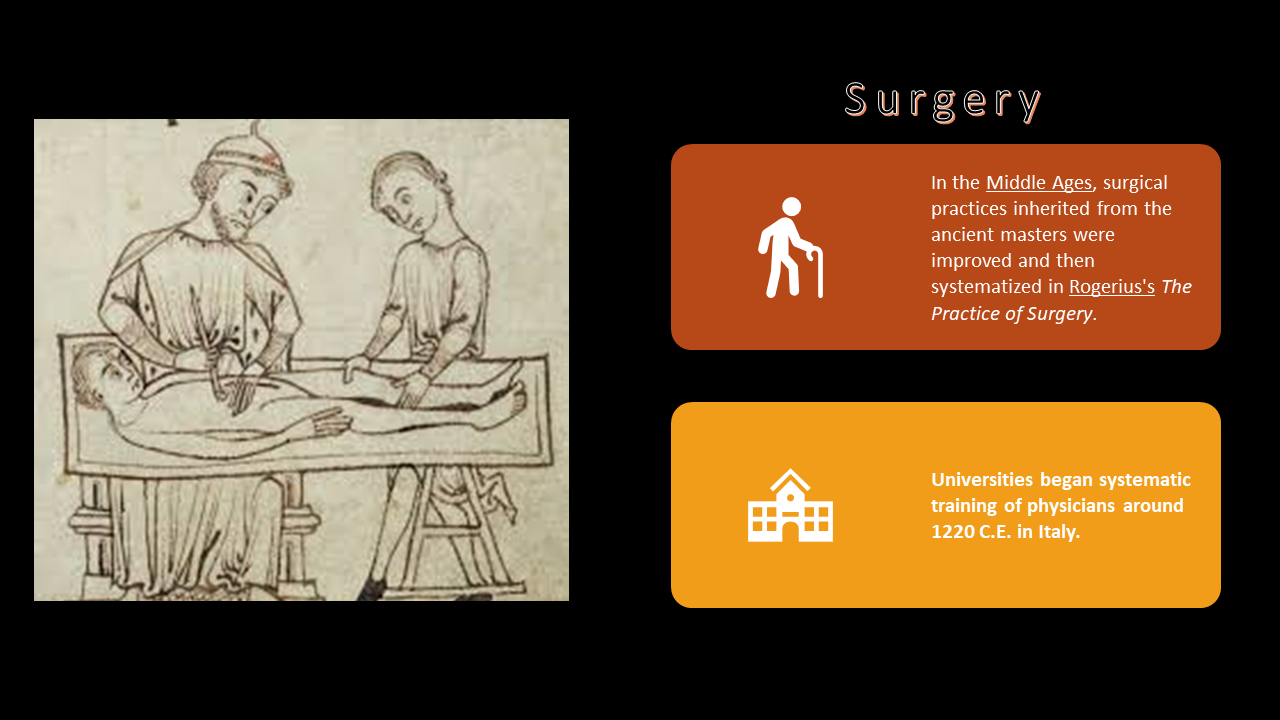 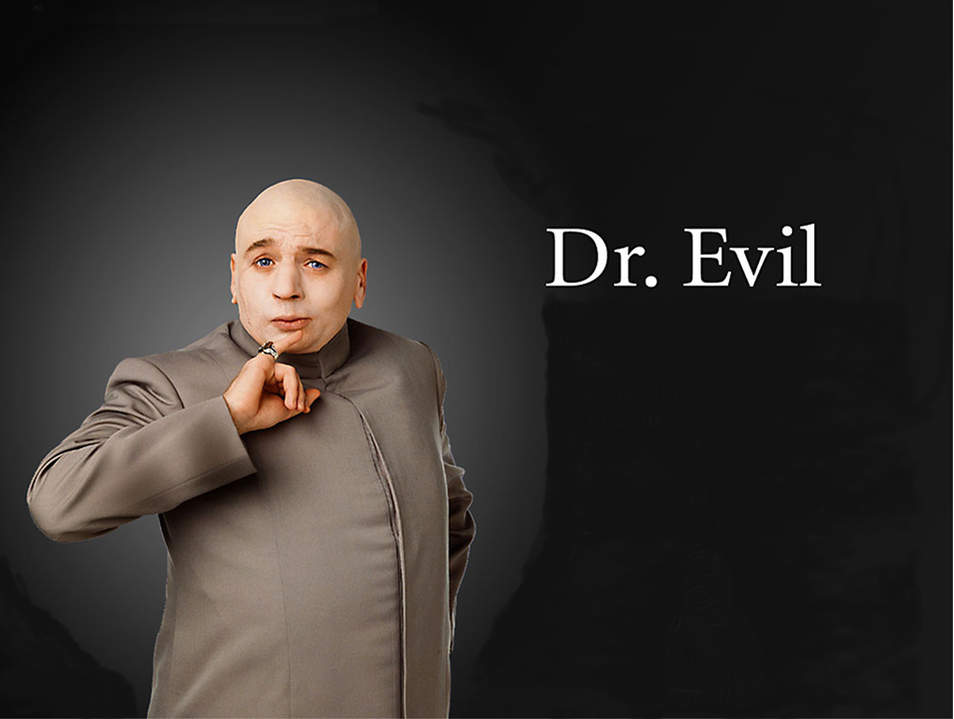 The pursuit of knowledge and science was seen as blasphemous and evil.  ​ 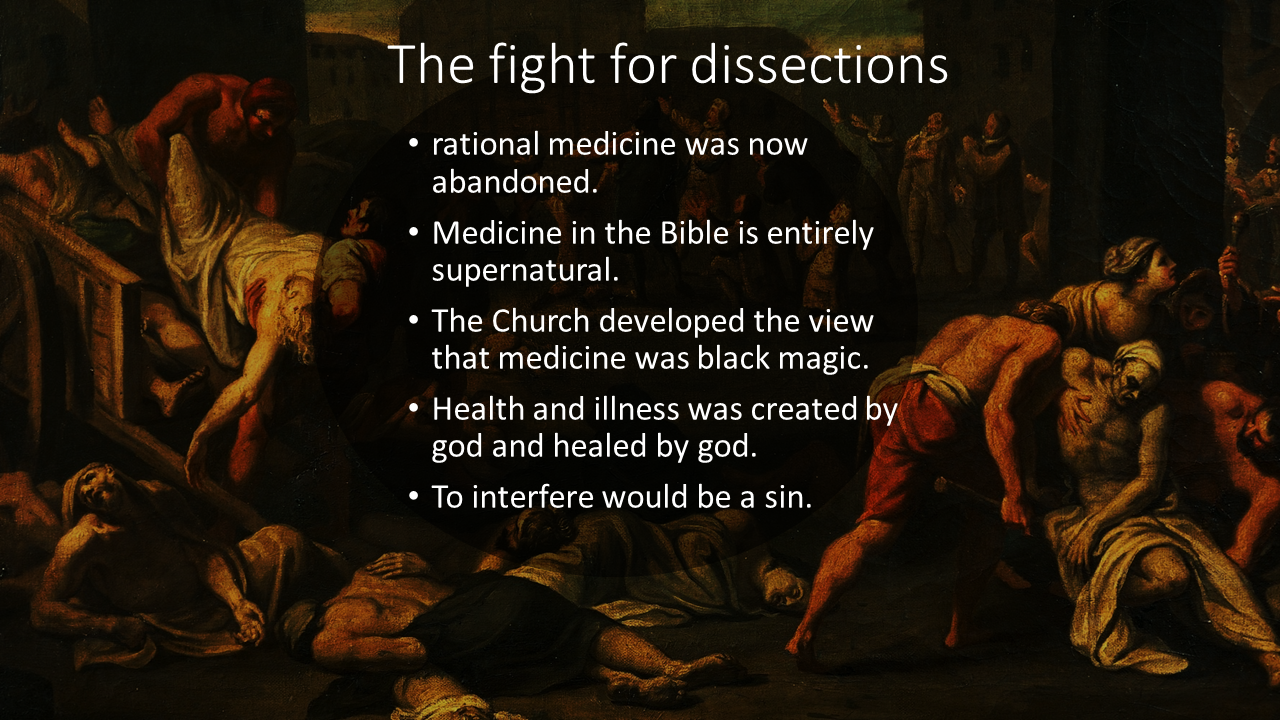 Illness was thought to be caused by sin, diabolical possession, witchcraft or other dark forces. From AD 300 to around 1700 all serious mental conditions were understood as symptoms of demonic possession.  ​ 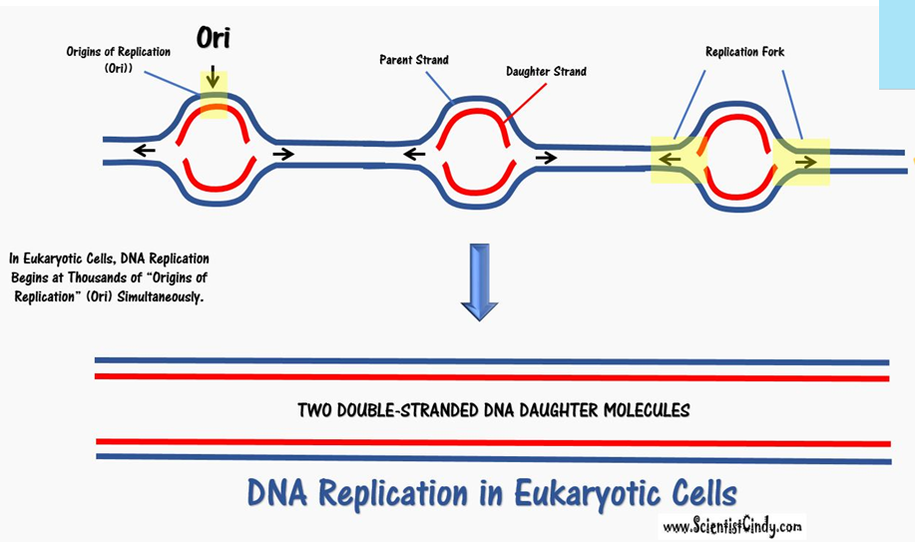 Since illness was thought to be caused by supernatural agents, cures had to be essentially supernatural as well. Every cure was literally miraculous, and these miracles could be effected only by prayer, penance and the assistance of saints. To claim otherwise was heretical and blasphemous. The Christian ideal was that women should die rather than allow themselves to be helped by a physician.
​ 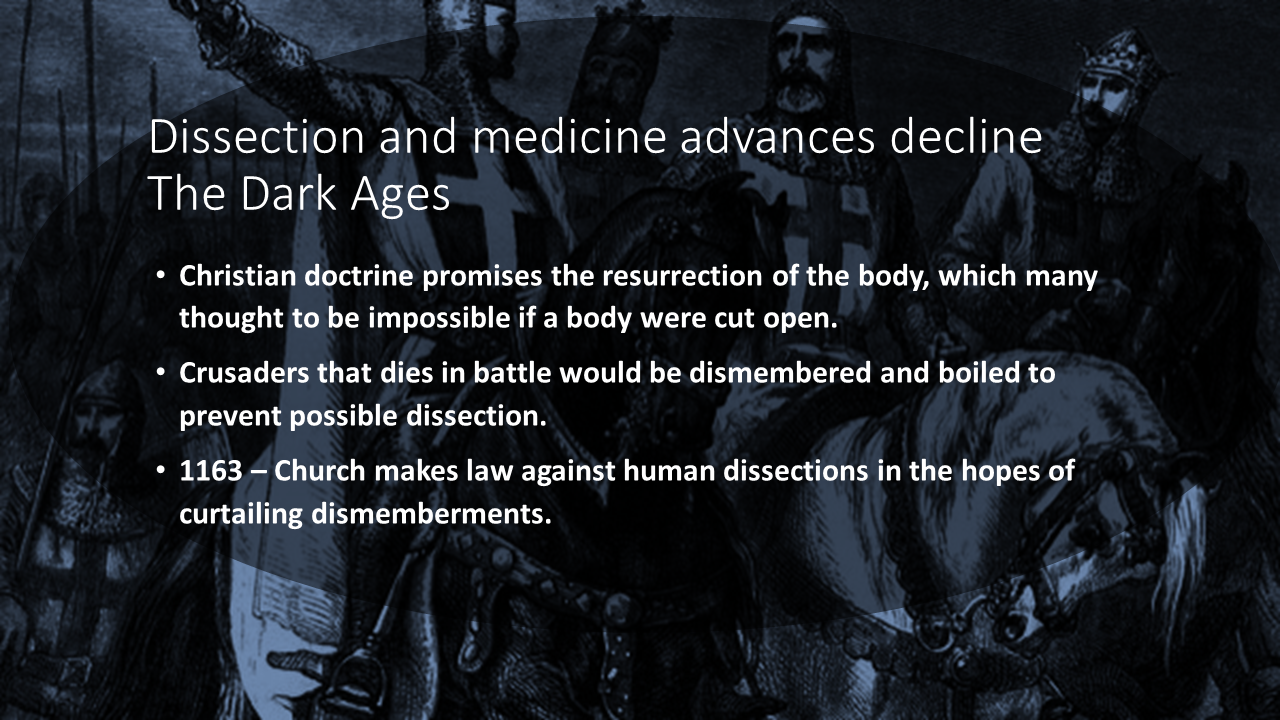 Dissection and medicine advances decline
The Dark Ages Christian doctrine promises the resurrection of the body, which many thought to be impossible if a body were cut open. Crusaders that dies in battle would be dismembered and boiled to prevent possible dissection. 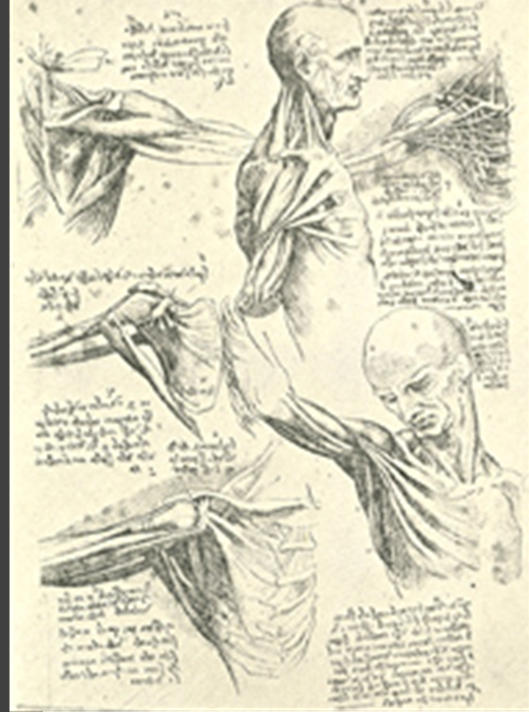 Da Vinci created more than 750 anatomical drawings that were never published.
​This period marked the “rebirth” of an empirical study of anatomy.

Criminals and Unclaimed Bodies of the Poor

​As human dissections became more numerous, the need for a source of cadavers grew.

In 1829, William Burke was hanged in Edinburgh for murdering victims by asphyxiation in order to provide cadavers to physicians.  ​​ 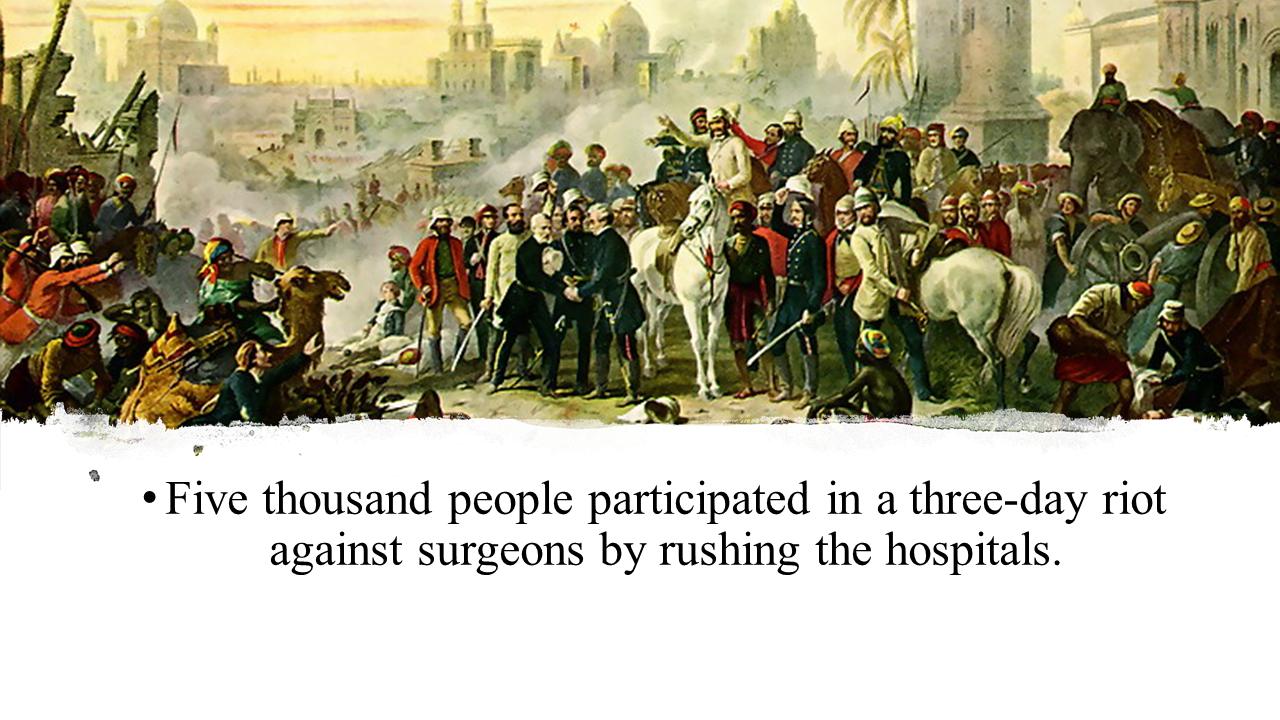 Riot In April 1788, New Yorkers rioted for three days upon discovering that bodies had been stolen from a graveyard. Five thousand people participated in a three-day riot against surgeons by rushing the hospitals. 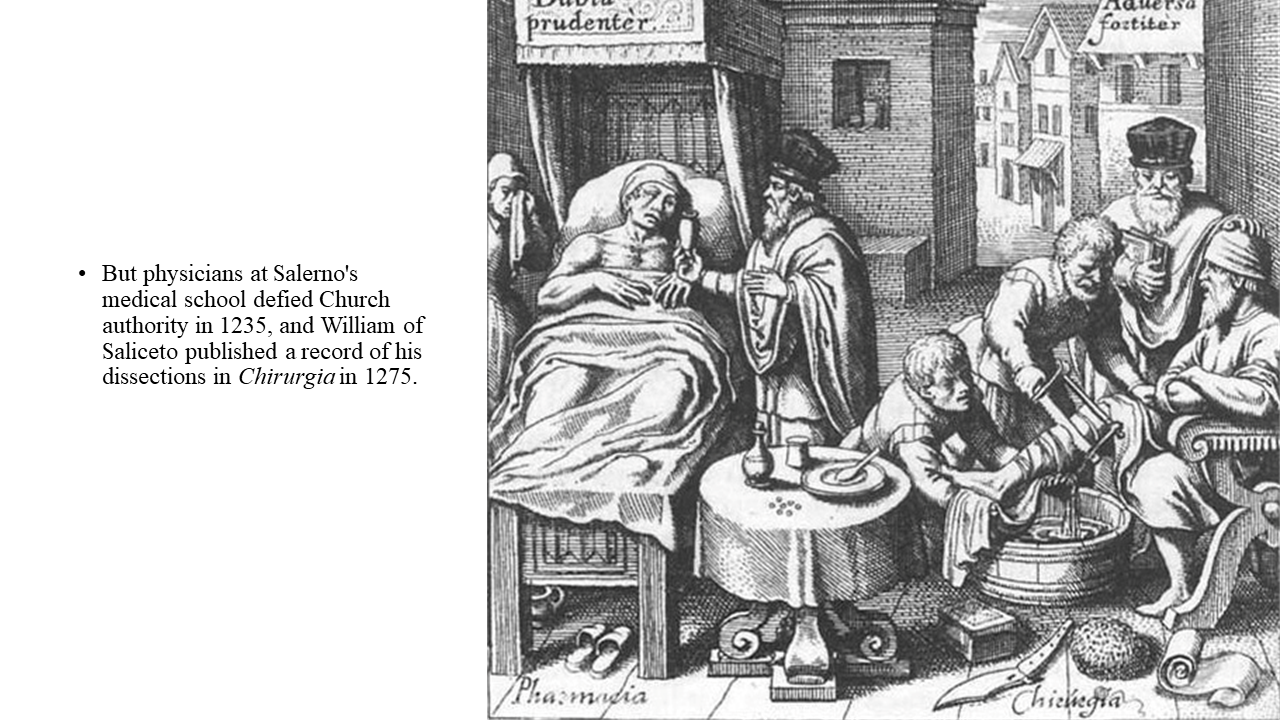 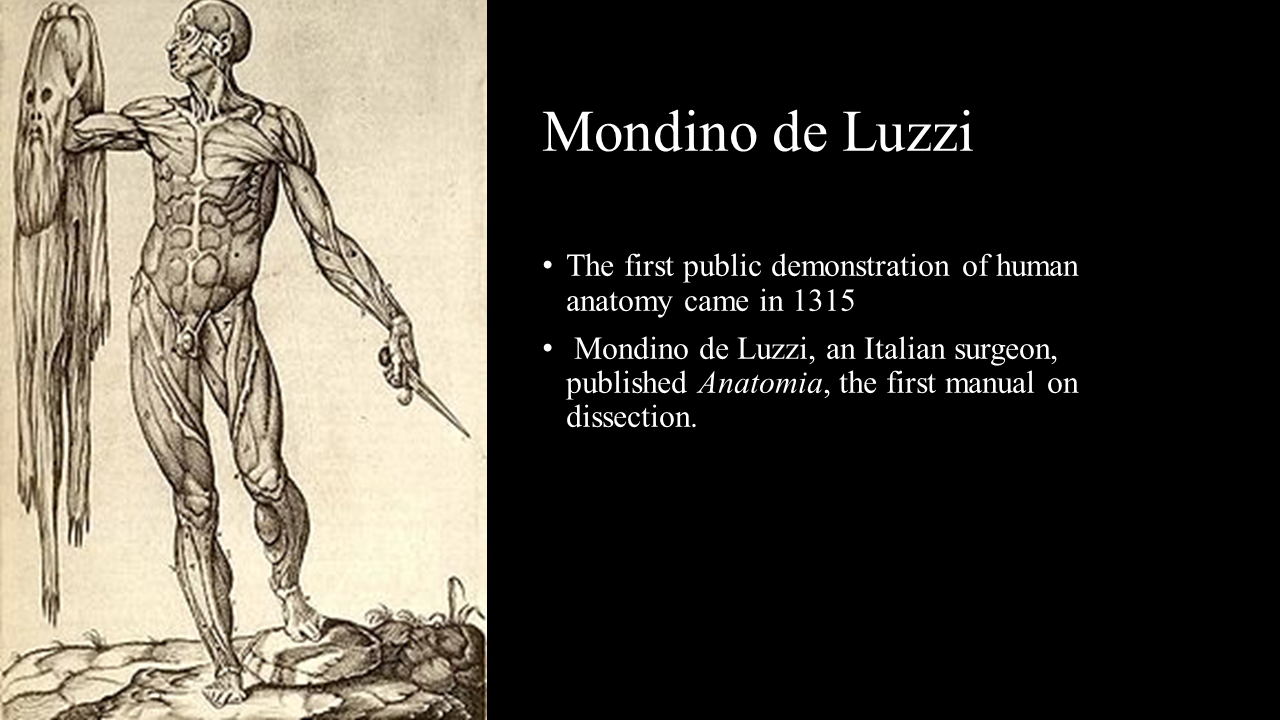 Andreas Vesalius
Andreas Vesalius was one of the founders of modern anatomy. He was sentenced to death for performing dissections (1564).
Andreas began to question classical medical texts and ideas. Historical anatomical texts were written during the time when dissection of humans was been forbidden by Greek and Roman religious law. 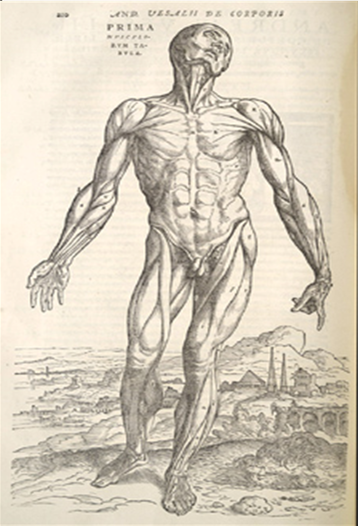 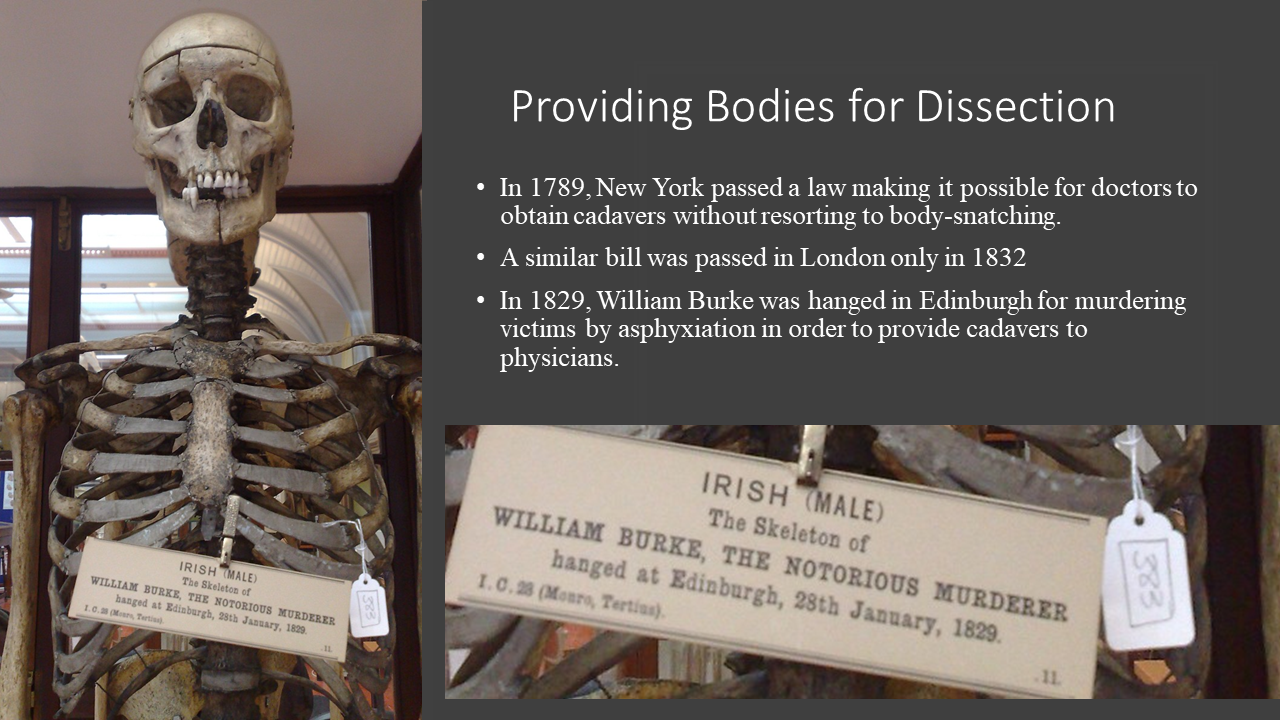 The interior of your body is hidden from the world and from you. What we are and what occurs beneath our skin can be to some... MYSTERIOUS...  FEARFUL...  AMAZING...
Throughout history, many religions viewed human dissection as a sin - a desecration of the body. Anatomical studies were banned in many societies and were held in secret, if at all.
Perhaps it reminds us of our own mortality?