The conduction system of the heart.

Electrical pulses in the heart are controlled by special groups of cells called pacemaker cells that exist in areas of the heart referred to as nodes.

The SA node is also known as the sinoatrial node, or more simply as the sinus node contains a cluster of specialized cells called pacemaker cells. The SA node is considered the pacemaker of the heart, because the SA node initiates the heart beat.
The SA (sinoatrial) node generates an electrical signal that causes the upper heart chambers (atria) to contract. The signal then passes through the AV (atrioventricular) node to the lower heart chambers (ventricles), causing them to contract, or pump. The SA node is located on the superior wall inside the right atrium of the heart.
The SA node is where the beginning of the conduction takes place.
​
The AV node is a cluster of specialized electrical cells positioned right near the middle of the heart. It is responsible for conducting electrical impulses from the top 2 chambers of the heart, the right and left atria, to the bottom 2 chambers of the heart, the right and left ventricles. Typically it is the only pathway electricity can travel to get from the top to the bottom of the heart. 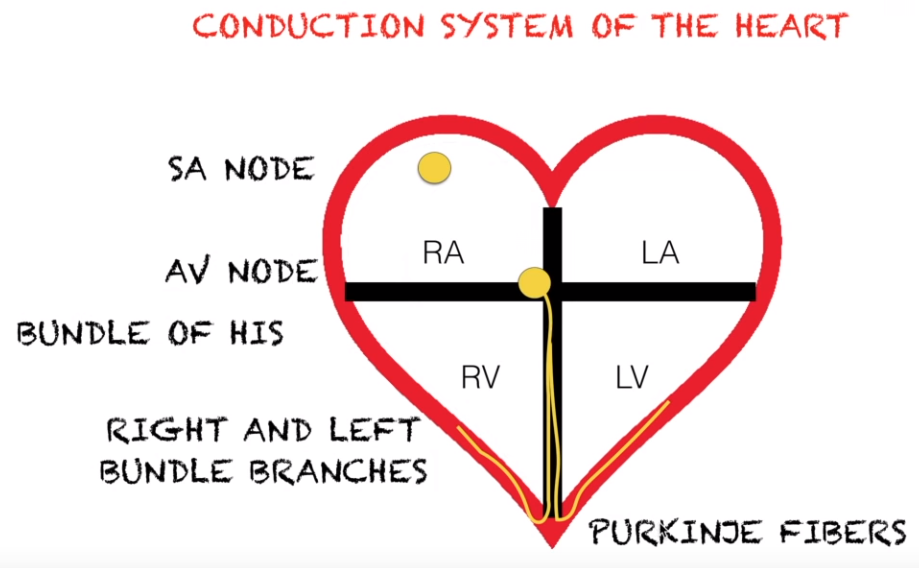 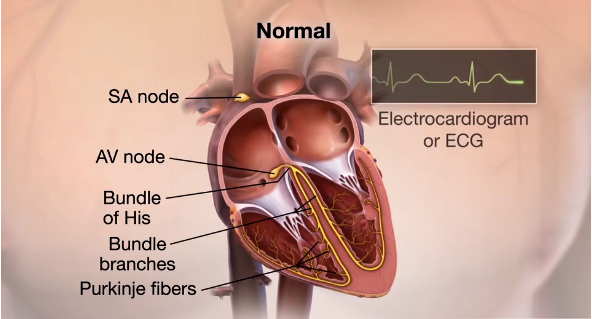 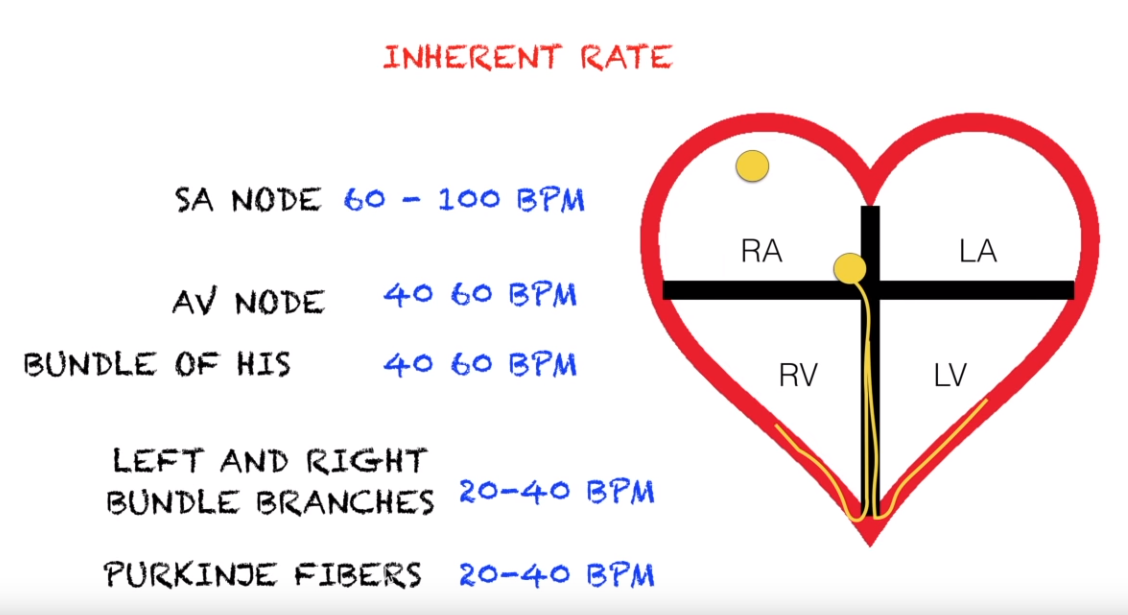 When the heart is functioning properly, the impulse generated at the SA node will continue all the way through the Purkinje fibers, generated a resting heart rate of ~ 60 - 100 bpm. However, if there is a blockage or a weak or absent electrical impulse from the SA node, the AV node responds by generated its own electrical impulse. When this occurs, we find that the resting heart rate is much lower (between 40 - 60 bpm). The bundle of His, also has the ability to generate its own impulse which also results in a lower heart rate of 40 - 60 bpm. Similarly, if the impulse from the AV node or the bundle of His is weak, an impulse may be generated by the left and right bundle branches or the Purkinje fibers. When the impulse is generated by the bundle branches or the Purkinje fibers, the heart rate becomes dangerously low (only about 20 to 40 bpm). 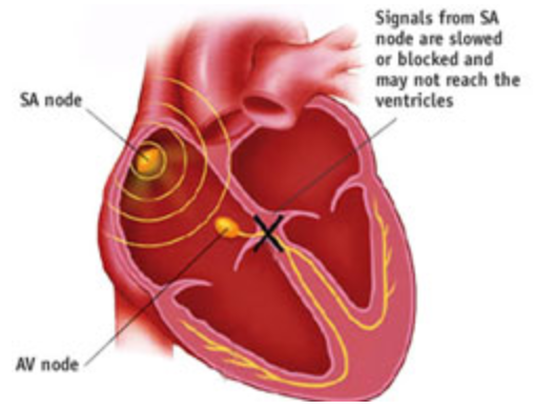 How to interpret an ECG in SIX STEPS

An electrocardiogram — abbreviated as EKG or ECG — is a test that measures the electrical activity of the heartbeat. With each beat, an electrical impulse (or “wave”) travels through the heart. This wave causes the muscle to squeeze and pump blood from the heart. 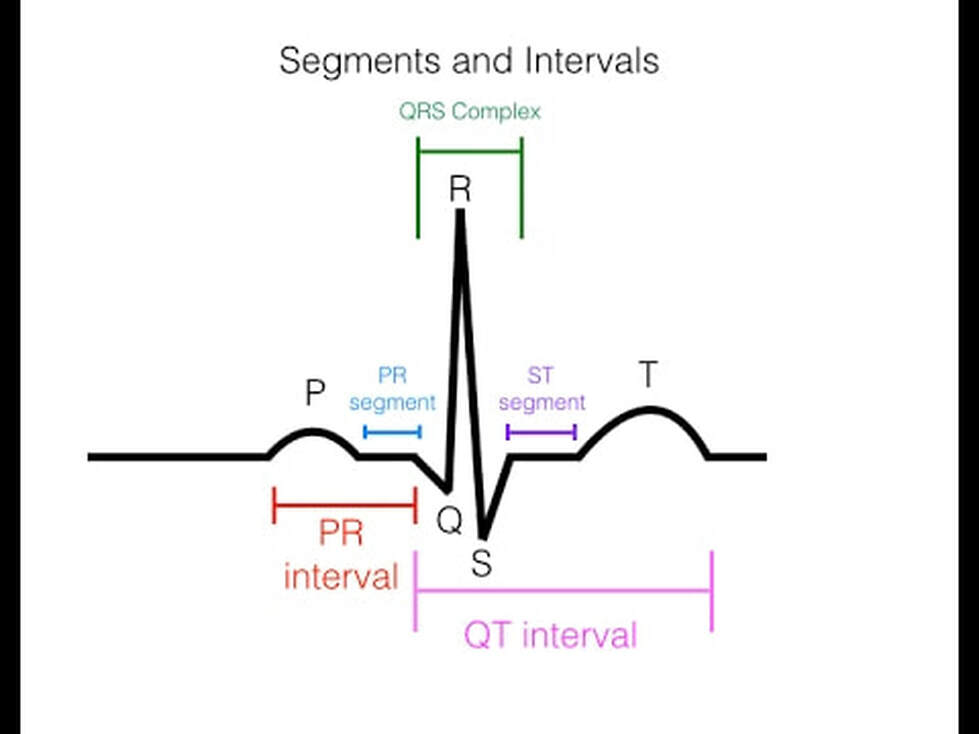 The ECG (EKG) has different parts. ​
The major features of the ECG include (in order): 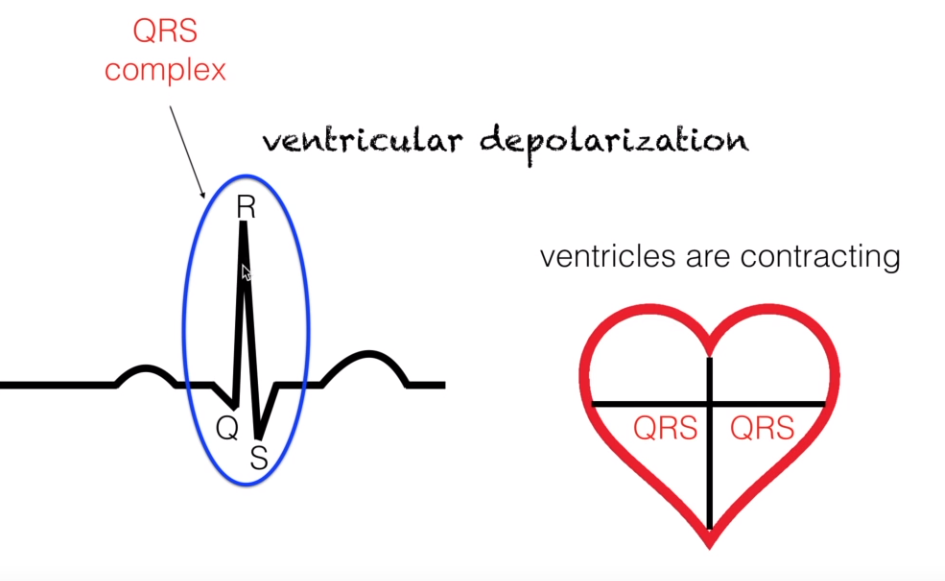 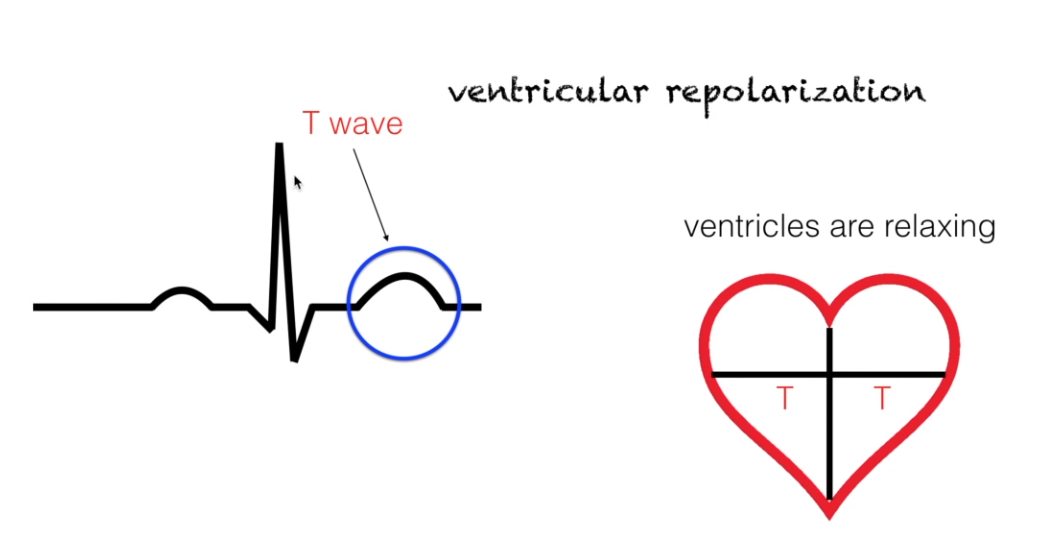 *Atrial repolarization also occurs, but it does not show up on an ECG, because it is masked by the much larger signal of the contracting ventricles occuring at the QRS complex. 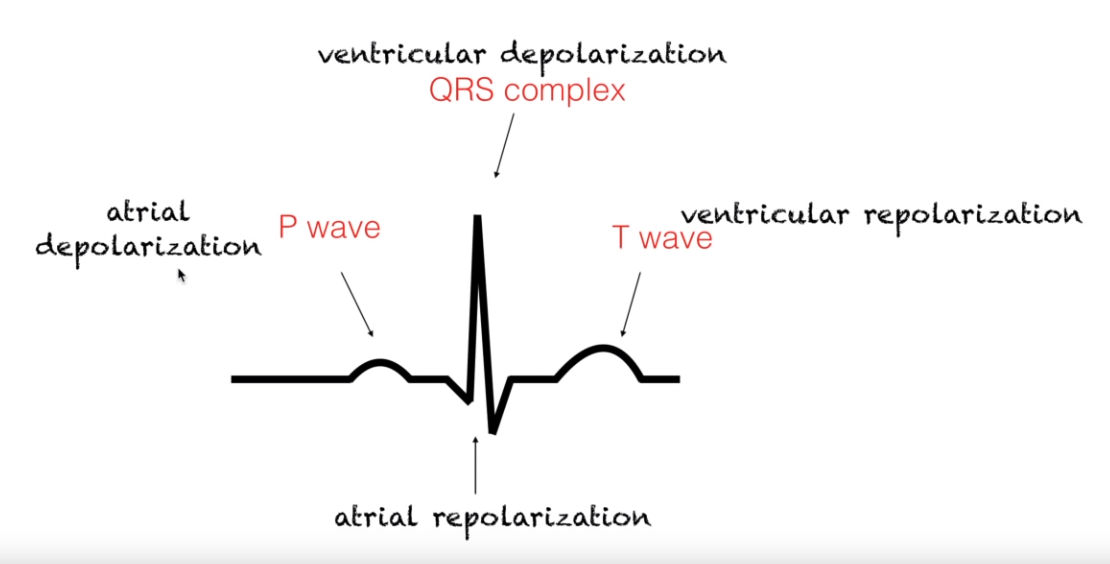 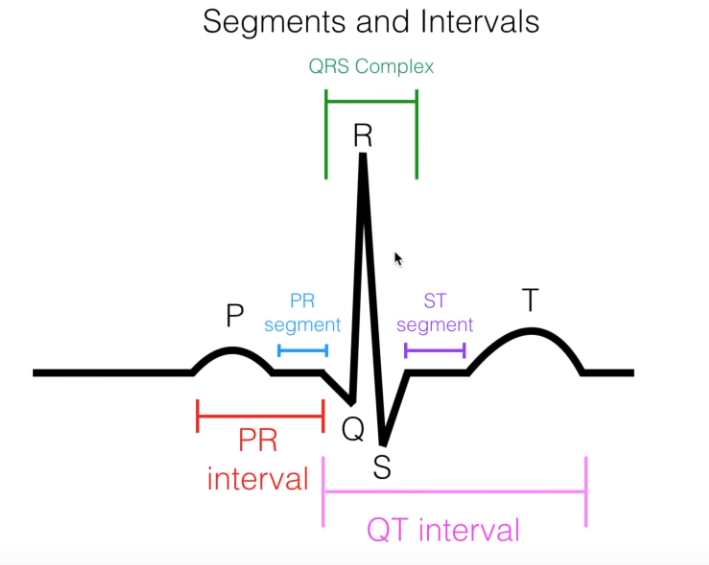 Segments and Intervals of the ECG include:
​The most important one for understanding the ECG, is the PR interval. 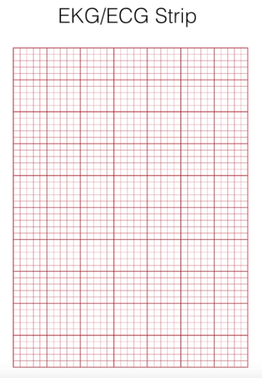 Electrical signals can be measured using an ECG strip. This strip contains larger boxes that are divided into a 5 by 5 grid of smaller boxes. 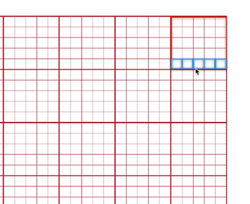 This horizontal axis of this grid represents TIME. Each small
box represents a time interval of 0.04 seconds. Since there are 5 of these small boxes, each large box represents 0.2 seconds (0.4 X 5 = 0.2). ​
How do we interpret an ECG?
A normal P wave would be present and upright. If the P wave is
absent or inverted, this indicates dysrhythmia perhaps from a junctional rhythm.

If the PR interval is more than ~0.20 seconds, this indicates dysrhythmia.

We can use an ECG to analyze the patient's heart rate or rhythm, to determine if it is regular or irregular. This is done by measuring the distance (counting the small boxes) between R's. 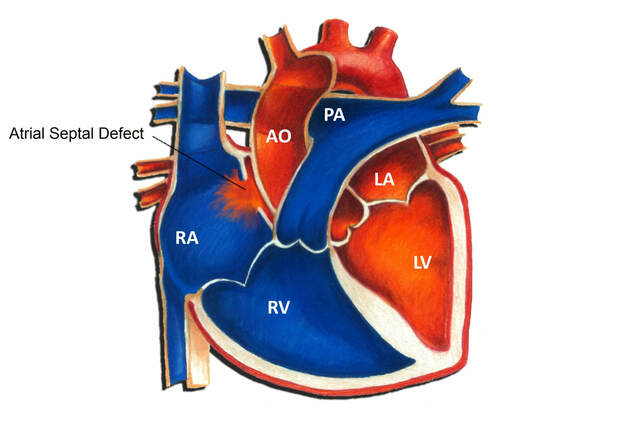