The domain Eukarya is divided into the following four kingdoms.

All algae have chloroplasts, which gives them their green color. The chloroplasts allows for the algae to make its own food using photosynthesis.
The EUGLENA are a type of algae that can be found in pond water. Click on the short video below to see how they move! They are green, because they contain chloroplasts, which allows them to make their own food using photosynthesis. They also have a flagellum which they use to move and to sense their environment.

Blepharisma japonicum
Protozoa get their name from the Greek words 'protos', which means 'first' and "zoan", which means 'animal'. As you may have guessed, the protozoans were names this, because they were the first animal-like organisms to evolve.

Protozoans are a very diverse group of organisms. Many of them are heterotrophic (hetero means 'other' and trophic means 'to eat'), meaning that they must consume other organisms as a food source in order to live. These protozoans usually feast on bacteria or other protozoa.

A bdelloid rotifer
Some species of protozoa can switch between being autotrophic (auto means 'self' and trophic means 'to eat') and heterotrophic. This means that these protozoans are capable of making their own food when there is an ample supply of sunlight, and they are capable of consuming other organisms as a food source when sunlight is scarce. There are even some protists that gain energy from the environment in a similar manner as fungi. These protists predigest their food source by secreting enzymes onto it (or into it) that function to break it down into a form that can be absorbed.

Tardigrades are microscopic creatures that are able to survive the some of the strangest conditions in the universe. They can hibernate without water for at least 100 years. They can survive temperatures 50% hotter than boiling water. They survive in pressures that are higher than the pressure in our deepest oceans. Tardigrades have even been blasted to outer space and were completely fine! They were just fine without air, without pressure and without water.

Example of an Illnesses Caused by Protozoa! Example = MALARIA

A.    Yeast is a microscopic fungus consisting of single oval cells that reproduce by budding, and are capable of converting  sugar into alcohol and carbon dioxide.
​
B.    Yeasts are eukaryotic, single-celled microorganisms classified as members of the fungus kingdom. 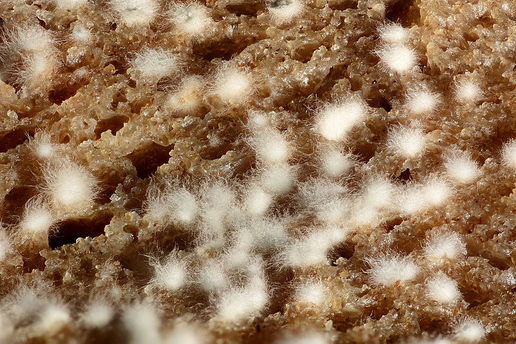 A.    Mold grows on bread when the bread comes in contact with dust that is carrying fungi, which are tiny microorganisms.

B.    Mold spores remain airborne until they land on a piece of food, germinate and grow into a healthy fungus.

C.    Mold lives off the food its growing on by eating away at it. It commonly grows right through whatever it's eating.

D.    Fungi secrete an enzyme onto their food source that breaks it down aiding digestion. They then grow microscopic roots into the food itself.