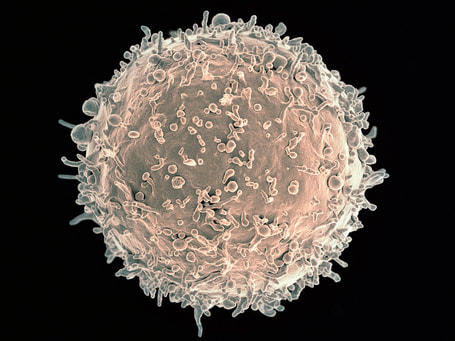 ​   It is easy for us to take for granted, waking up in the morning, taking a full, deep breath and feeling healthy.  But like all good things, you never know what you got... until it's gone!

​The human body has developed specialized structures and mechanisms to pathogens.
The body's first line of defense is the "innate nonspecific immune system".  Each of these systems has humoral components (components that travel within the fluids of the body, such as the blood ans the lymph) and the cellular components which involves the physical structures of the cells.
The body has three strategies for defending against disease.
The first and second lines of defense are considered "nonspecific mechanisms of defense", because they are defenses of the body that generally prevent any microorganism from invading the body.  The first and second lines of defense are "innate", meaning that these are defenses that we are born with.
In contrast, the third line of defense is acquired, adaptive and specific!. We acquire adaptive immunity by being exposed to different substances, chemicals, or organisms throughout our lifetime, but especially in our early childhood. These "foreign" substances become training for the immune system to learn what belongs to the body and what does not belong.

cell junctions ​
Cell junctions such as tight junctions, desmosomes, and gap junctions, help to prevent pathogens from easily passing into the body. ​
Tight junctions allow the membranes of adjacent cells to come into physical contact with one another, to prevent, limit, or control the movement of substances (or microbes) between cells. Desmosomes create a barrier between cells by using intermediate fibers that string adjacent cells together. Gap junctions are cytoplasmic bridges that connect adjacent cells and allow for cell to cell communication or chemical signaling. This configuration does not leave much room between adjacent cells for microbes to pass. (illustration credit: modification of work by Mariana Ruiz Villareal) ​​​
CELL JUNCTIONS 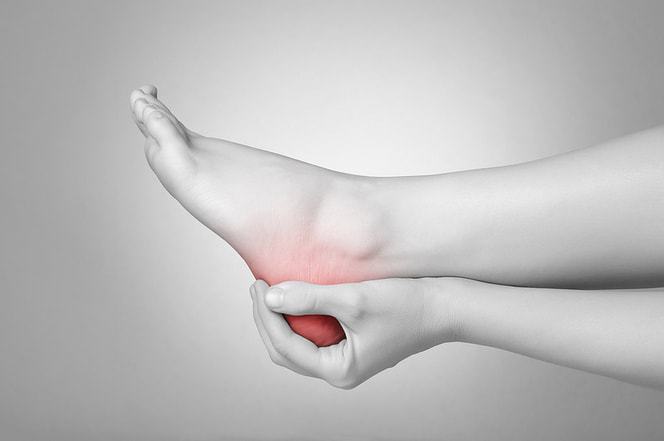 Second Line of Innate Defense: Occasionally, a pathogenic organism will penetrate a person's first line of defense and invade the body. When this breach occurs, the body launches the second line of defense. The second line of defense involves the activation of specialized "defensive cells" and the mobilization of proteins. The processes leads to inflammation and fever. Interestingly, the inflammation and fever is actually not being caused directly by the pathogen, but is being caused as the defensive mechanisms of your body in response to the presence of the pathogen. 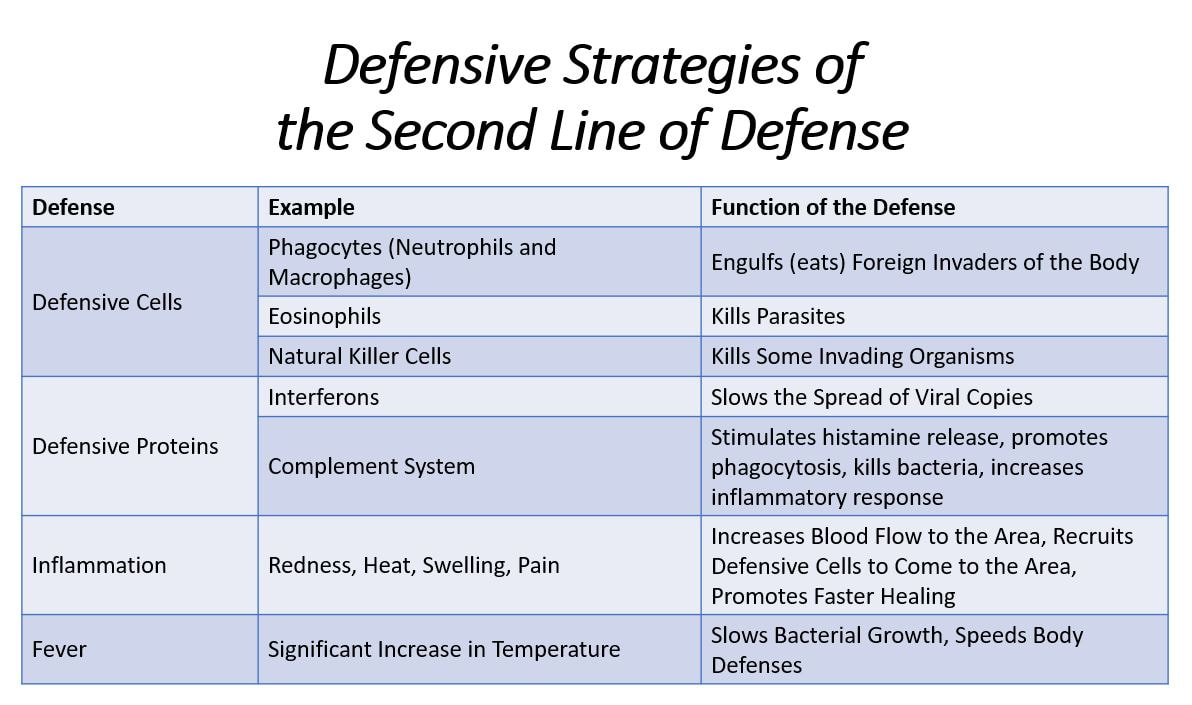 Natural killer cells are white blood cells that are constantly on patrol seeking out any suspicious characters it finds in the body. Natural killer cells (NK cells) will indiscriminately kill anything that it perceives as "abnormal". This means that the NK cells will not only destroy foreign invaders, but will also destroy the body's own cells that may show signs of mutation, or infection or disease. For example, host cells that have become cancerous or that have become infected with a virus are likely targets for the NK cells. The natural killer cells destroy their target by coming into direct contact with the suspicious cell and secreting proteins that degrade the structural integrity of its membrane until the cell dies.

The second line of defense also includes the action of defensive proteins, such as interferons and the proteins of the complement system. ​
interferons 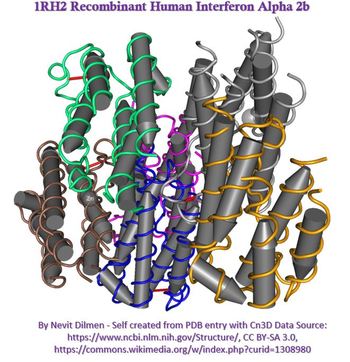 Interferons are proteins which act to slow down the process of viral reproduction. Once a cell has become infected with a virus, its days are numbered. Cells infected with a virus will secrete small proteins called interferons that will interfere (hence the name)  with the ability of the virus to spread to nearby cells.
Interferons accomplish their viral "interference" with a one-two punch, that comes in two distinct phases. The first phase, is to recruit macrophages and natural killer (NK) cells to destroy and eliminate cells that have already become infected. The second phase involves defending the remaining healthy uninfected cells from invasion. The interferon protein protects these cells by stimulating those cells to produce additional proteins that act to inhibit viral replication should infection occur. This is very effective, because the virus cannot reproduce without the hostile takeover of a host cell. Without a host cell, the virus cannot reproduce and the virus stops spreading. This allows the white blood cells to gain the upper hand and win the battle.
Pharmaceutical preparations of interferon have been shown to be effective against certain cancers and viral infections including hairy cell leukemia, Kaposi's sarcoma, hepatitis C, HPV, and herpes..
the complement system
The complement system refers to a large group of proteins that work to "complement" or enhance the effects of body's other defense mechanisms. These proteins are always present in the circulatory system of the body, but only become activated when an infection is sensed. The functions of the activated complement system includes the following: 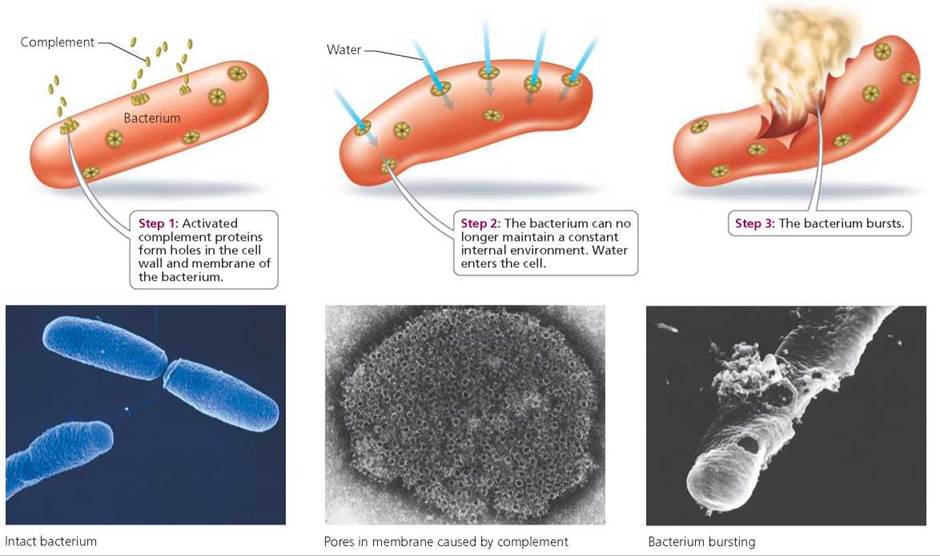 Inflammation paves the way for defensive cells to gain access to the area of injury by widening the blood vessels and increasing capillary permeability. This allows phagocytes to swarm as the first responders that come calling as soon as the chemical message released by damaged cells is received.  In a matter of only minutes, the neutrophils arrive on the scene by squeezing their way through the capillary walls and commence engulfing unwanted organisms and debris. Macrophages arrive soon after to assist in gobbling up unwanted organisms and particles. At times the area can become filled with dead cells, dead microbes and phagocytes that take on the form of puss that can leak or ooze out of a wound.

The first and second lines of defense are nonspecific so they are ready to go at a moment's notice. This is kind of like the fast food drive through. You don't get a custom made order, but it is a one size fits most and most if the time it's good enough to feed your hunger. However, sometimes you really need something special that is prepared in a unique way, to meet your specific needs. Well, that will take a little time, but it will be customized and it will be "just what the doctor ordered!"
Sometimes the one size fits most approaches of the first and second lines of defense aren't enough to eradicate the pathogen making the person ill. It is time for that special order, the third line of defense!! The third line of defense refers to the specific responses and memory of the immune system.
lymphocytes
Lymphocytes are the white blood cells that are responsible for both the specificity and the memory of the adaptive immune response.
There are two types of lymphocytes: 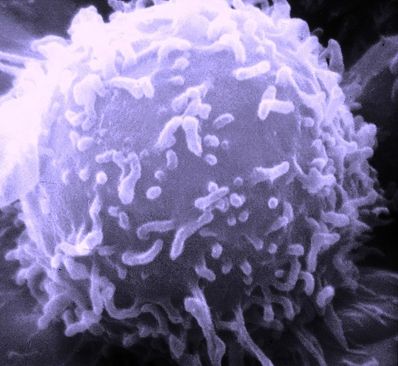 mode from haematopoietic stem cells in the bone marrow, but they develop in different organs of the body. The B cells continue to develop in the bone marrow, while the T cells, travel to the thymus gland to develop.
The T cells specialize in learning how to distinguish between the cells that do belong in the body and the ones that do not belong in the body by screening their major histocompatibility complexes (MHCs). Once the T cells are fully mature (differentiated) they leave the thymus and circulate through the body on a permanent mission of "seek and destroy".
When an antigen is detected, B cells and T cells will be recruited that have receptors bearing the correct configuration to bind to the invader in a lock and key manner so that it can be destroyed.

Step One: Identifying "Self" from "Nonself"

`    The cells of each person's body has a unique molecular marker that tells the cells of their immune system, that that cell is part of the body... that the cell belongs there and is a friend and should not be destroyed. These molecular markers are called Major Histocompatibility Complexes. (MHC). Only identical twins would have identical MHCs. 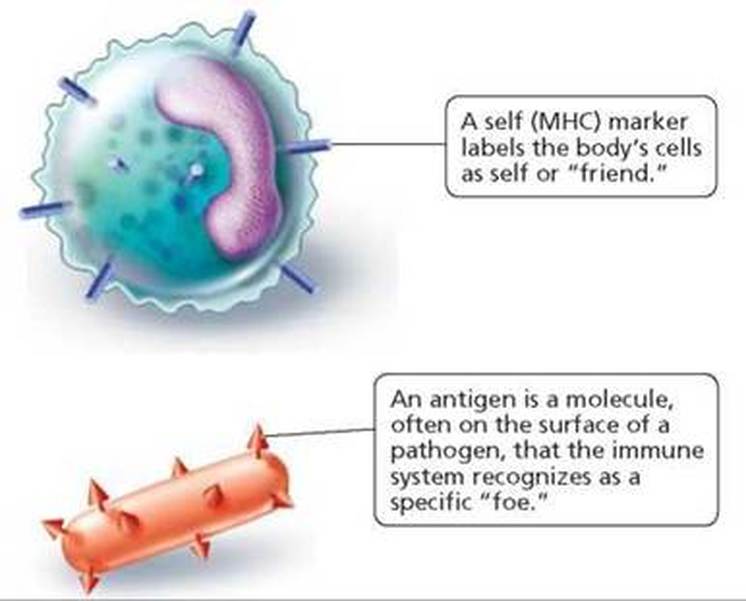 Lymphocytic B cells receptors that detect specific antigens. When the B cell is mature, it leaves the bone marrow and resides in the lymph of the body or the lymphatic organs.  When the B cell encounters its antigen, its receptor with the specialized antibodies binds to it and does not let go. The lymphocytic B cell engulfs the bound cell through the process of endocytosis.
Once the unwanted cell has been engulfed, the B cell will then display the antigen from the target cell on its own surface, as a MHC-II molecule. ​​This is called an MHC-II to distinguish it from the MHC (or more specifically MHC-I). 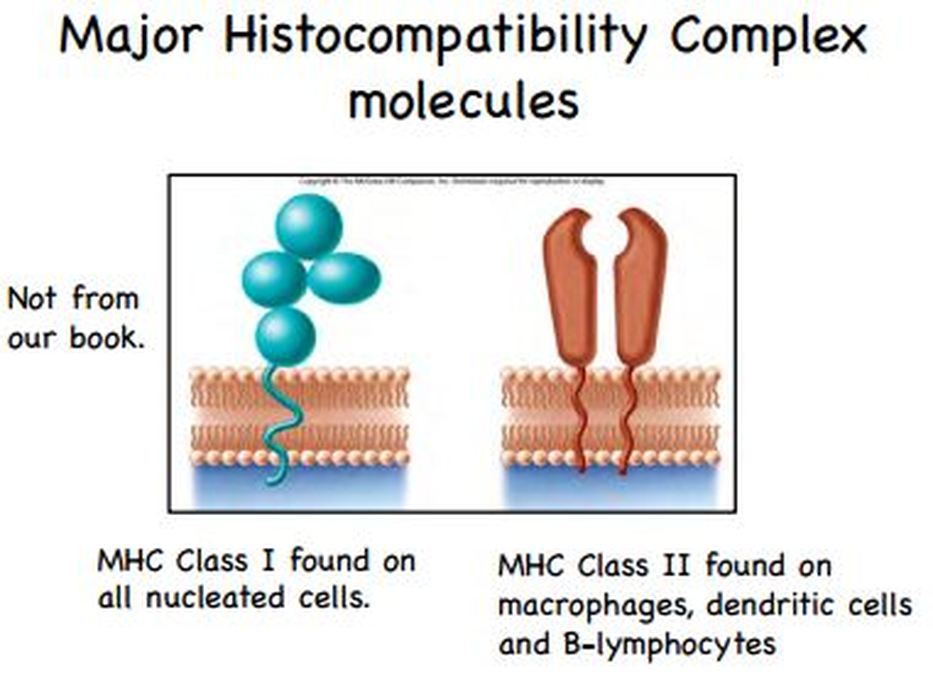 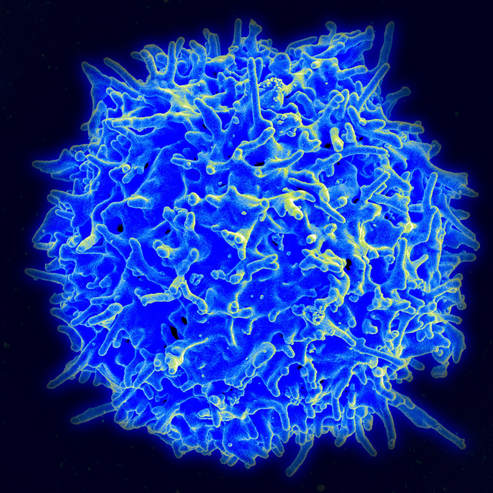 The T cell will then bind to the MHC-II complex and become activated. The activated T cell releases cytokines that causes the B cells to undergo rapid cell division. This results in thousands of new B cells; some of which become memory cells. Memory cells will retain the antigen information from the infection that lead to their creation. In the event that the body becomes infected with the same (or very similar) pathogen in the future, the memory cells will respond by dividing and differentiating into plasma cells. As plasma cells, they release vast numbers of antibodies that will flow through the circulatory system.

B-Cell Activation is a Large Part of the
​ Immune Response 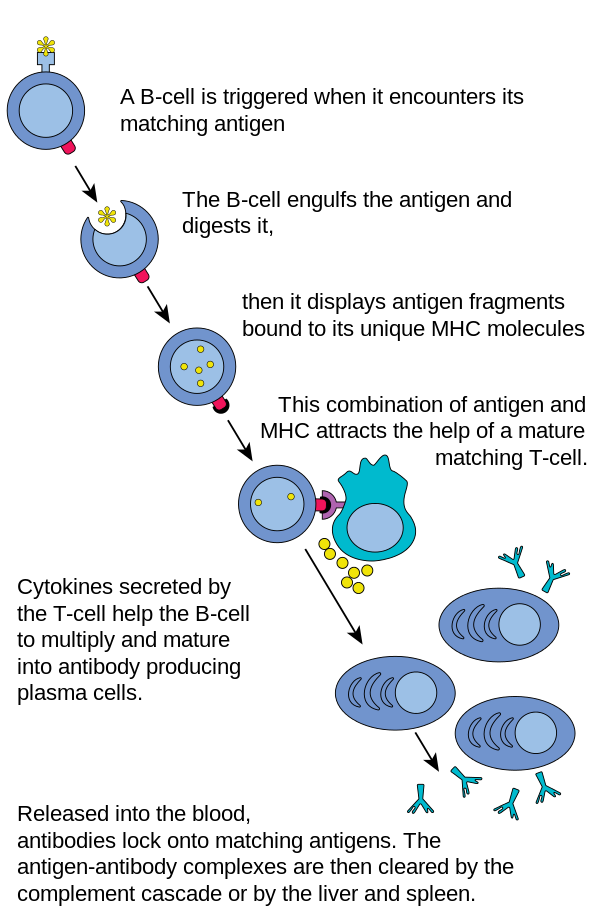