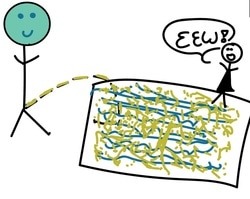 ​      ​Diffusion behaves in the way just described, because it is able to move freely and unhindered. In biological systems, molecules are not permitted to move freely. The movement of ions and molecules is tightly regulated by the cell membrane. The cell membrane is selectively-permeable .  Substances are permitted to pass through under certain conditions through pores or channels or transporters. ​​The movement of water across the membrane is of particular importance to biological systems. Failure of the cell to maintain osmotic balance with its environment can have a catastrophic negative effects. The movement of water molecules across the semi-permeable cell membrane is called osmosis.​​​​​
​To understand this concept, it is important to think about a solution in terms of its components.